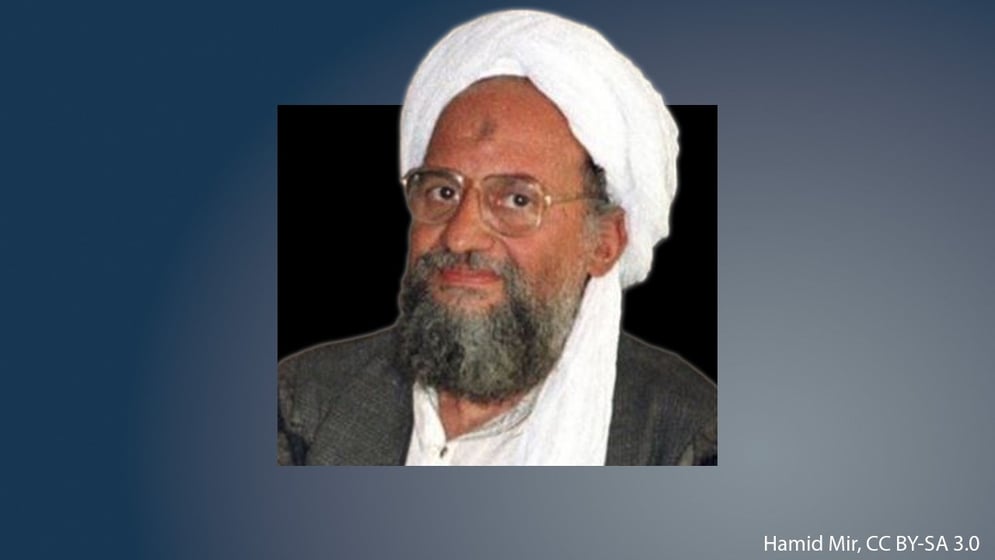 Zawahiri, who just turned 71 years old, had remained a visible international symbol of the group, 11 years after the US killed Osama bin Laden. At one point, he acted as bin Laden's personal physician.

Zawahiri was sheltering in a safehouse in Kabul, according to the official, and was killed in "a precise tailored airstrike" using two Hellfire missiles. The drone strike was conducted at 9:48 p.m. ET on Saturday was authorized by Biden following weeks of meetings with his Cabinet and key advisers. No American personnel were on the ground in Kabul at the time of the strike.

Senior Haqqani Taliban figures were aware of Zawahiri's presence in the area, the official said Monday, in "clear violation of the Doha agreement," and even took steps to conceal his presence after Saturday's successful strike, restricting access to the safe house and rapidly relocating members of his family, including his daughter and her children, who were intentionally not targeted during the strike and remained unharmed. The US did not alert Taliban officials ahead of Saturday's strike.

Biden, who tested positive for Covid-19 on Monday as he deals with a rebound case of the virus, spoke outdoors from the Blue Room Balcony at the White House.

"He was deeply involved in the planning of 9/11, one of the most responsible for the attacks that murdered 2,977 people on American soil. For decades, he was the mastermind of attacks against Americans," Biden said.

He added, "I authorized a precision strike that would remove him from the battlefield, once and for all."

In a series of tweets, Taliban spokesman Zabiullah Mujahid said, "An air strike was carried out on a residential house in Sherpur area of Kabul city on July 31."

He said, "The nature of the incident was not apparent at first" but the security and intelligence services of the Islamic Emirate investigated the incident and "initial findings determined that the strike was carried out by an American drone."

The tweets by Mujahid came out prior to CNN reporting Zawahiri's death. Mujahid said the Islamic Emirate of Afghanistan "strongly condemns this attack on any pretext and calls it a clear violation of international principles and the Doha Agreement."

Zawahiri's targeted killing comes a year after the US' military withdrawal from Afghanistan and the Taliban's takeover of the country. Around the time of Kabul's fall, Biden indicated that there would be enduring US military capabilities -- namely, drones -- to target terrorists.

Zawahiri comes from a distinguished Egyptian family, according to the New York Times. His grandfather, Rabia'a al-Zawahiri, was an imam at al-Azhar University in Cairo. His great-uncle, Abdel Rahman Azzam, was the first secretary of the Arab League.

He eventually helped to mastermind the deadliest terror attack on American soil, when hijackers turned US airliners into missiles.

"Those 19 brothers who went out and gave their souls to Allah almighty, God almighty has granted them this victory we are enjoying now," al-Zawahiri said in a videotaped message released in April 2002.

It was the first of many taunting messages the terrorist -- who became al Qaeda's leader after US forces killed bin Laden in 2011 -- would send out over the years, urging militants to continue the fight against America and chiding US leaders.

Zawahiri was constantly on the move once the US-led invasion of Afghanistan began after the September 11, 2001, attacks. At one point, he narrowly escaped a US onslaught in the rugged, mountainous Tora Bora region of Afghanistan, an attack that left his wife and children dead.

He made his public debut as a Muslim militant when he was in prison for his involvement in the 1981 assassination of Egyptian President Anwar Sadat.

"We want to speak to the whole world. Who are we? Who are we?" he said in a jailhouse interview.

By that time, al-Zawahiri, a young doctor, was already a committed terrorist who conspired to overthrow the Egyptian government for years and sought to replace it with fundamentalist Islamic rule. He proudly endorsed Sadat's assassination after the Egyptian leader made peace with Israel.

He spent three years in prison after Sadat's assassination and claimed he was tortured while in detention. After his release, he made his way to Pakistan, where he treated wounded mujahadeen fighters who fought against the Soviet occupation of Afghanistan.

That was when he met bin Laden and found a common cause.

"We are working with brother bin Laden," he said in announcing the merger of his terror group, Egyptian Islamic Jihad, with al Qaeda in May 1998. "We know him since more than 10 years now. We fought with him here in Afghanistan."

Together, the two terror leaders signed a fatwa, or declaration: "The judgment to kill and fight Americans and their allies, whether civilians or military, is an obligation for every Muslim."

The attacks against the United States and its facilities began weeks later, with the suicide bombings of US embassies in Kenya and Tanzania that killed more than 200 people and wounded more than 5,000 others. Zawahiri and bin Laden gloated after they escaped a US cruise missile attack in Afghanistan that had been launched in retaliation.

Then, there was the attack on the USS Cole in Yemen in October 2000, when suicide bombers on a dinghy detonated their boat, killing 17 American sailors and wounding 39 others.

The culmination of Zawahiri's terror plotting came on September 11, 2001, when nearly 3,000 people were killed in the attacks on the twin towers of the World Trade Center and Pentagon. A fourth hijacked airliner, headed for Washington, crashed in a Pennsylvania field after passengers fought back.

Since then, al-Zawahiri raised his public profile, appearing on numerous video and audiotapes to urge Muslims to join the jihad against the United States and its allies. Some of his tapes were followed closely by terrorist attacks.

In May 2003, for instance, almost simultaneous suicide bombings in Riyadh, Saudi Arabia, killed 23 people, including nine Americans, days after a tape thought to contain Zawahiri's voice was released.

The US State Department had offered a reward of up to $25 million for information leading directly to his capture. A June 2021 United Nations report suggested he was located somewhere in the border region of Afghanistan and Pakistan, and that he may have been too frail to be featured in propaganda.

This is a breaking story and will be updated.