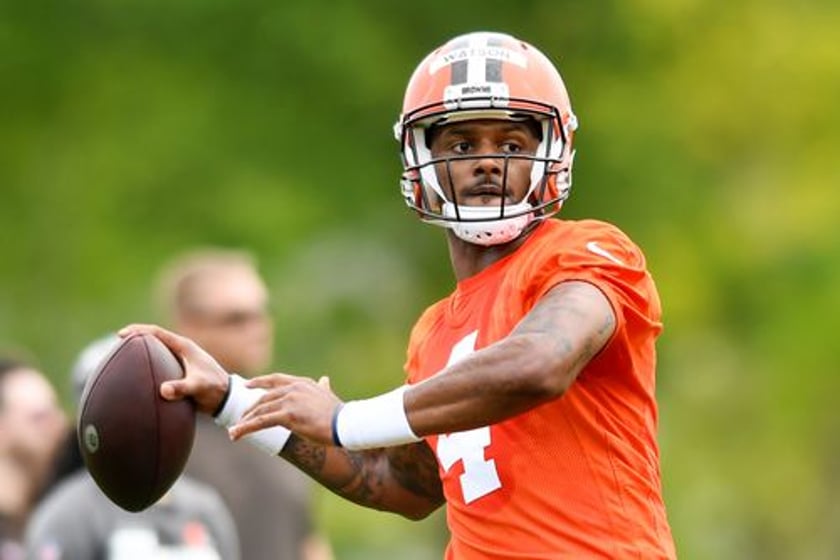 Cleveland Browns quarterback Deshaun Watson has been suspended for six games without pay for violating the NFL's personal conduct policy for his "predatory conduct" in private meetings with massage therapists, according to a ruling by a judge jointly appointed by the NFL and the NFL Players Association.

"Although this is the most significant punishment ever imposed on an NFL player for allegations of non-violent sexual conduct, Mr. Watson's pattern of conduct is more egregious than any before reviewed by the NFL," former federal judge Sue L. Robinson wrote in the 16-page ruling.

The six-game suspension is well below the NFL's request that Watson be suspended for at least the entire 17-game season and postseason. In her ruling, Robinson critiqued the NFL for asking for an unprecedented full-season suspension which would be far lengthier than other players accused of nonviolent sexual conduct.

"While it may be entirely appropriate to more severely discipline players for nonviolent sexual conduct, I do not believe it is appropriate to do so without notice of the extraordinary change this position portends for the NFL and its players," she wrote.

Either the NFL or the NFLPA can now appeal to NFL Commissioner Roger Goodell in writing within three business days, according to their collective bargaining agreement. Goodell or his designee "will issue a written decision that will constitute full, final and complete disposition of the dispute and will be binding upon the player," per the agreement.

In a statement, the NFL praised Robinson's "diligence and professionalism" in the process and said it is reviewing its next steps.

On Sunday night, the NFLPA and Watson released a joint statement saying they will not appeal regardless of the decision and asked the NFL to do the same.

The ruling comes after a number of women who worked as massage therapists filed lawsuits against Watson alleging sexual assault or misconduct during massage sessions. A total of 24 women sued the quarterback, and all but one of the cases has since been settled, according to the plaintiffs' attorney Tony Buzbee.

Watson, a three-time Pro Bowler, did not play last season while a member of the Houston Texans because of a trade demand as well as the investigations into these allegations. He has repeatedly denied the allegations against him and said he has no regrets about any of his actions.

In March, a grand jury in Harris County, Texas, declined to charge Watson over allegations of harassment and sexual misconduct after determining there was not enough evidence to charge him with a crime. The incidents were described as "stemming from massage therapy sessions," according to a statement on the NFL website.

Days later, the Browns traded three first-round picks for Watson and then signed him to a 5-year, fully guaranteed $230 million contract, the most guaranteed money in NFL history.

Watson will not be paid during his suspension, but the Browns structured his new contract so his base salary is $690,000 his first year and then $46 million for each of the next four years.

Watson's attorney Rusty Hardin told CNN he will not comment until after the NFL decides whether to appeal.

Browns owners Dee and Jimmy Haslam issued a statement Monday saying Watson and his representatives have followed the process laid out by the league and players association.

"We respect Judge Robinson's decision, and at the same time, empathize and understand that there have been many individuals triggered throughout this process," the Haslams said. "We know Deshaun is remorseful that this situation has caused much heartache to many and he will continue the work needed to show who he is on and off the field, and we will continue to support him."

Browns head coach Kevin Stefanski said he respects the judge's opinion, but he has not read the entire ruling. He gave his support to Watson, who the coach said will speak to the media later.

"I am going to remain (with) what we have said all along about Deshaun the person. I would mention -- Deshaun has said it -- that he is working to be the best version of himself. He is committed to that," Stefanski said. "He said that publicly, he said that privately and I believe that."

CNN has reached out to the players' union for comment.

Robinson's ruling comes after she held hearings in the case for three days in late June and reviewed the NFL's 215-page investigative report on Watson's case, which included testimony from four of the massage therapists.

The ruling states the NFL proved by a preponderance of the evidence Watson violated three aspects of the league's personal conduct policy: sexual assault, as defined by the NFL; conduct that poses a genuine danger to the safety and well-being of another person; and conduct that undermines or puts at risk the integrity of the NFL.

"It is difficult to give weight to a complete denial when weighed against the credible testimony of the investigators who interviewed the therapists and other third parties," she wrote.

The most common discipline for domestic or gendered violence and sexual acts is a six-game suspension, and prior cases involving non-violent sexual assault, such as with Watson, resulted in at most a three-game suspension, Robinson wrote.

She said the league appears to be basing its disciplinary decisions on public outcry, noting the case of former running back Ray Rice. In 2014, the NFL initially suspended Rice for two games for violating the league's domestic violence policy, but then extended that suspension indefinitely after TMZ Sports released video of the incident; a decision that was ultimately overturned by an arbitrator.

"Just as the NFL responded to violent conduct after a public outcry, so it seems the NFL is responding to yet another public outcry about Mr. Watson's conduct," Robinson wrote. "Here, the NFL is attempting to impose a more dramatic shift in its culture without the benefit of fair notice to -- and consistency of consequence for -- those in the NFL subject to the Policy."

Robinson also mandated Watson limit his massage therapy to team-directed sessions and therapists for the rest of his career.

Last month, 30 women who have made or intended to make claims against the Texans organization over Watson's alleged misconduct settled their claims, according to a statement from Buzbee and the Texans' ownership. On Monday, Buzbee declined to comment on the NFL's discipline.

"I've said in the beginning that the civil process and the NFL's disciplinary process are very different," he said in a statement. "My role was to advance the cause of my clients, in civil court -- nothing more. I've done that. I am extremely proud of these women and our legal team's efforts."