Hutchinson has cooperated extensively with the investigation, having sat for four closed-door depositions. She brought the goods for her in-person appearance Tuesday. She revealed how then-President Donald Trump and his inner circle were warned about the potential for violence on January 6, and how Trump wanted to join the throngs of his supporters at the US Capitol.

The testimony bolstered the narrative that the committee has been driving toward over the last few weeks: That Trump incited and supported the insurrection as part of a desperate power grab to steal a second term, and that many of his top advisers thought his schemes were illegal.

Hutchinson really moved the ball forward in terms of establishing that Trump was personally aware of the potential for violence, yet forged ahead on January 6 with his attempts to rile up his supporters to interfere with the joint session of Congress to certify President Joe Biden's victory.

She said Trump was told that morning that weapons were being confiscated from some of his supporters who came for his rally. Later, when Trump and his team were at the Ellipse -- the large oval lawn on the south side of the White House -- and before his speech, Trump barked out orders to his staffers to "take the mags away" -- referring to the metal detectors -- because the people in the crowd, "they're not here to hurt me."

Trump also said, "I don't f**king care that they have weapons," according to Hutchinson. This is particularly shocking, because Trump then encouraged the same crowd to march to the Capitol while lawmakers were affirming Biden's win. (Hundreds of Trump's diehard supporters soon stormed the Capitol, many carrying knives, bear spray, metal poles, tasers and a few guns.)

When Hutchinson told her boss, Meadows, about early reports of weapons getting confiscated, Meadows didn't even look up from his phone, according to Hutchinson. Two days earlier, he told her that "things might get real, real, bad on January 6."

"The potential for violence was learned or known before the onset of the violence, early enough for President Trump to have taken steps to prevent it," said Republican Rep. Liz Cheney of Wyoming, the panel's GOP vice chair. She added that Trump could have urged his supporters not to march to the Capitol, or condemned the violence more quickly, but didn't, because he "had something else in mind." 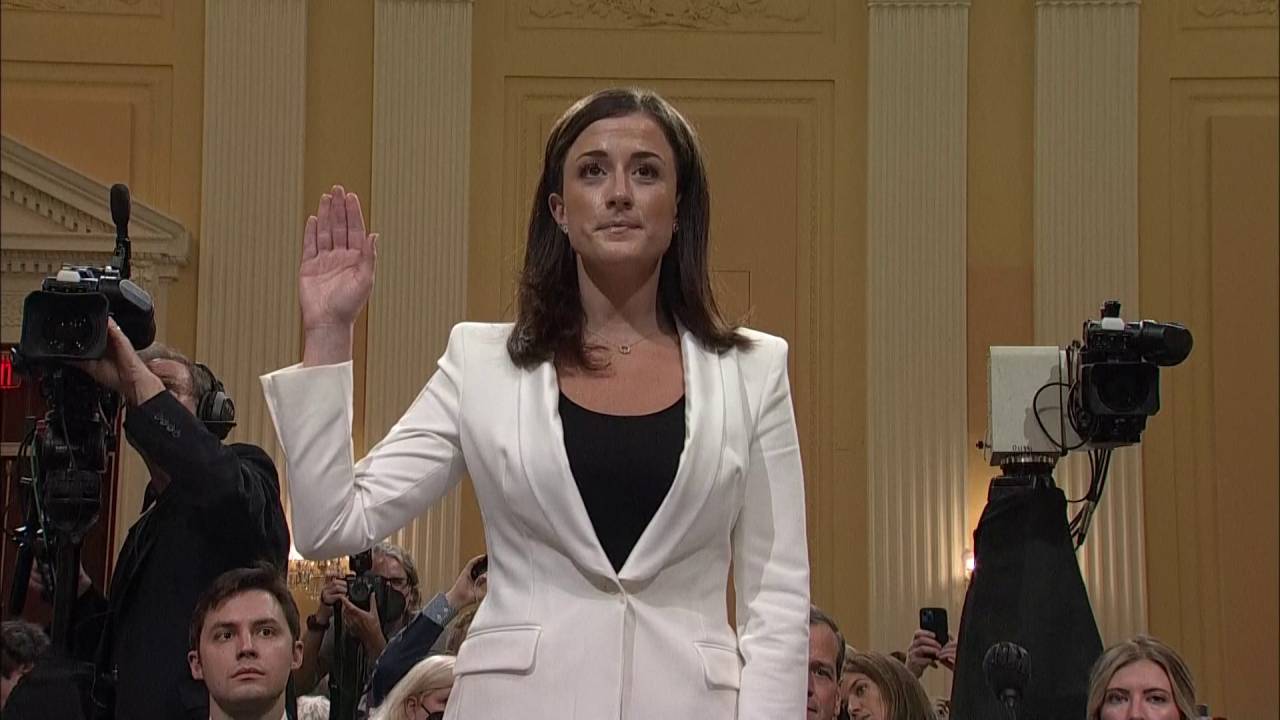 The select committee effectively proved as much on Tuesday by featuring a mix of damning witness testimony and White House records that show Trump intended to join his supporters at the Capitol and was pushing to do so just minutes before the violence began to escalate.

It was previously known that Trump wanted to go to the Capitol, but Hutchinson's testimony established for the first time that people around Trump had advance knowledge of this plan.

The reality of Trump's intentions became clear to national security officials in real time as they learned the Secret Service was scrambling to find a way for the former President to travel to the Capitol while he was on stage urging his followers to march, according to National Security Council chat logs from that day that were revealed for the first time during Tuesday's hearing.

The NSC chat logs provide a minute-by-minute accounting of how the situation evolved from the perspective of top White House national security officials on January 6 and, along with witness testimony delivered on Tuesday, contradict an account by Meadows in his book where he says Trump never intended to march to the Capitol.

"MOGUL's going to the Capital ... they are clearing a route now," a message sent to the chat log at 12:29 p.m. ET on January 6 reads -- referring to the former President's secret service code name.

"MilAide has confirmed that he wants to walk," a 12:32 p.m. message reads. "They are begging him to reconsider."

Hutchinson also testified that some in Trump's orbit had made clear days before January 6 that Trump wanted to travel to the US Capitol.

She told the committee Tuesday that Trump lawyer Rudy Giuliani told her on January 2 -- four days before the US Capitol was attacked by Trump supporters -- that "we're going to the Capitol" on January 6, and that Trump himself was also planning to be there.

Hutchinson testified Tuesday that she heard a secondhand account of how Trump was so enraged at his Secret Service detail for blocking him from going to the Capitol on January 6 he lunged to the front of his presidential limo and tried to turn the wheel.

Tony Ornato, then-White House deputy chief of staff, told Hutchinson that Robert Engel, who was the Secret Service agent in charge on January 6 that repeatedly told Trump on their way back to the White House after Trump's Ellipse speech that it wasn't safe to go to the Capitol.

According to Hutchinson, Ornato recounted Trump screaming, "I'm the f**king President. Take me up to the Capitol now."

Trump then "reached up toward the front of the vehicle to grab at the steering wheel," Hutchinson remembered learning. She added that, according to Ornato, Trump used his other hand "lunge" at Engel.

Engel and Ornato have both testified to the committee behind closed doors, but their statements were not used in the hearing Tuesday.

Hutchinson also recounted a separate Trump tantrum after then-Attorney General William Barr told the Associated Press in December 2020 there was no evidence of widespread fraud in the 2020 election.

"I remember hearing noise coming from down the hallway," Hutchinson began. She saw the President's valet in the dining room, changing the tablecloth, ketchup dripping down the wall, and a porcelain plate shattered on the floor.

"The President was extremely angry at the attorney general's ... interview and had thrown his lunch against the wall," Hutchinson said. "I grabbed a towel and started wiping the ketchup off the wall."

The anecdote came up as the committee questioned Hutchinson about Trump's state of mind after losing the election.

Cipollone warned: 'People are going to die and the blood's gonna be on your f**king hands'

Trump defended the rioters chanting for the hanging of then-Vice President Mike Pence on January 6, according to Hutchinson.

Hutchinson relayed a conversation she observed between White House Counsel Pat Cipollone and Meadows after they discussed with Trump the chants to inflict violence on Pence.

"I remember Pat saying something to the effect of 'Mark, we need to do something more. They're literally calling for the vice president to be f**king hung,'" Hutchinson recalled.

Meadows replied, "You heard him, Pat. He thinks Mike deserves it. He doesn't think they're doing anything wrong," according to Hutchinson.

Cipollone responded, "This is f**king crazy. We need to be doing something more."

Hutchinson testified that Cipollone had previously rushed into Meadows' office after rioters breached the Capitol and told Meadows what had happened, and said they needed to go meet with Trump.

"Mark, something needs to be done, or people are going to die and the blood's gonna be on your f**king hands," Cipollone told Meadows, according to Hutchinson. "This is getting out of control."

Trump delivered a speech on January 7, 2021, finally acknowledging that Biden would be inaugurated in part because there was a "large concern" by the White House that Pence and the Cabinet could invoke the 25th Amendment to remove him from power, according to Cassidy's testimony.

Hutchinson also testified that Trump did not want to include references in the speech to prosecuting the pro-Trump rioters, but instead wanted to float pardons for them. After the White House Counsel's office pushed back, Trump did mention pardons in that speech.

If the 25th Amendment had been invoked, Trump could've put his presidency up for a vote before Congress, where two-thirds would have been necessary to kick him out.

"There was a large concern of the 25th Amendment potentially being invoked, and there were concerns about what would happen in the Senate if it was," Hutchinson testified.

While Trump gave the speech effectively conceding the election, he wanted to remove calls for "prosecuting the rioters or calling them violent" from early drafts of his January 7 speech, according to Hutchinson, but wanted to float pardons to his supporters.

"He didn't want that in there," Hutchinson said. "He wanted to put in that he wanted to potentially pardon them."

Trump's conduct on January 6 was 'un-American' and 'unpatriotic,' Hutchinson says

In emotional and powerful testimony, Hutchinson said Trump's behavior on January 6 was "unpatriotic" and "un-American."

The committee asked Hutchinson to describe her real-time reaction from January 6, when Trump attacked Pence in a tweet at 2:24 p.m. ET, which was after his supporters invaded the Capitol, forcing Pence, lawmakers, and staffers to run for their lives.

"As a staffer ... I remember feeling frustrated, disappointed, and really, it felt personal. It was really sad," Hutchinson said. "As an American, I was disgusted. It was unpatriotic. It was un-American. We're watching the Capitol building get defaced over a lie. And it was something that was really hard in that moment to digest. ... I still struggle to work through the emotions of that."

Her condemnation of Trump's behavior may shed some light on her motivations for coming forward with so much damaging information about January 6. Committee members have heaped praise on Hutchinson and other Republicans who have testified, calling them patriots.

The committee has secured testimony from some major witnesses members of Trump's inner circle, even members of his family. But Cheney suggested during the hearing that there might be a Trump-imposed blockade of sorts, and that the panel has evidence of witness tampering.

She said one witness -- whom the committee did not identify -- testified that: "What they said to me is, as long as I continue to be a team player, they know that I'm on the team, I'm doing the right thing, I'm protecting who I need to protect, you know, I'll continue to stay in good graces in Trump world."

Another unidentified witness said they were told by someone in Trump's orbit that Trump was "thinking about you" and that "he knows you're loyal" and hopes that "you're going to do the right thing when you go in for your deposition."

Cheney said the committee takes this "seriously" and will be considering "next steps," potentially hinting at a criminal referral, for possible witness tampering or obstruction. Democratic Rep. Bennie Thompson of Mississippi, the committee chairman, issued a public plea for more cooperation, saying to potential witnesses that if "you discovered some courage you had hidden away somewhere, our doors remain open."

Trump has denied all wrongdoing regarding January 6 and the related investigations.

The new evidence from the committee is consistent with a years-long pattern of behavior by Trump, who has repeatedly used private and public channels to pressure people who could testify against him. This happened with his former lawyer Michael Cohen and his 2016 campaign chairman Paul Manafort during the Russia investigation, and with a US ambassador during the 2019 impeachment hearings.

Trump has also retaliated against people who provided damaging public testimony against him, including a top White House national security official and his ambassador to the European Union, who both described his pressure campaign against Ukraine during House impeachment hearings in 2019.

This story has been updated with additional developments Tuesday.