Holifield, McGinnis Lead SE in Opening Round at GAC Championship 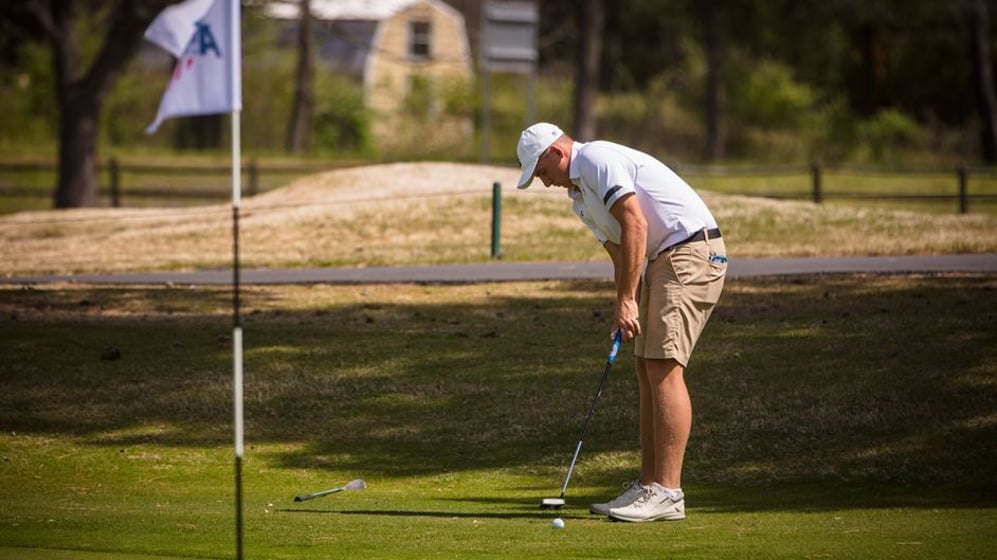 HOT SPRINGS, Ark. – Jordan Holifield and Dalton McGinnis posted matching opening rounds and both currently sit fifth to lead Southeastern to fourth place after one round at the Great American Conference Championship in Hot Springs, Ark.

Round two is set for Monday, with Jesse Rouse leading the Savage Storm off the tee box with the group teeing off at 8:50 a.m., while Holifield will tee off at 9:30 a.m. SE golfers will be paired with players from Harding and Arkansas-Monticello.

SE carded an opening round 304 as a team, sitting seven shots back of Henderson State who is in third.

Arkansas Tech and Southwestern Oklahoma State are tied for the lead in the tournament after 18 holes with matching scores of 295.

The Storm hold a one-stroke lead over Harding in fifth at 305, With UAM in sixth, followed by Northwestern Oklahoma State, Southern Arkansas, and Southern Nazarene.

Holifield and McGinnis lead the way for SE after carding matching rounds of 73.

Holifield closed out the front and back nines with birdies, but suffered bogeys on seven, 13, and 16 to finish with his one over.

McGinnis birdied six, 10 and 18, but suffered four bogeys to keep his round at plus-one as well.

Justice Hartman posted six bogeys and a double, but closed out his first round with a birdie to close out a 79 opening round which is tied for 33rd.

Trent Zorgdrager added a matching 79 to finish the round tied for 33rd after five bogeys and a double on his first circuit of the course.

Jesse Rouse closed out SE's group with an 81 which is tied for 39th, posting a pair of birdies across from seven bogeys and a pair of double bogeys.