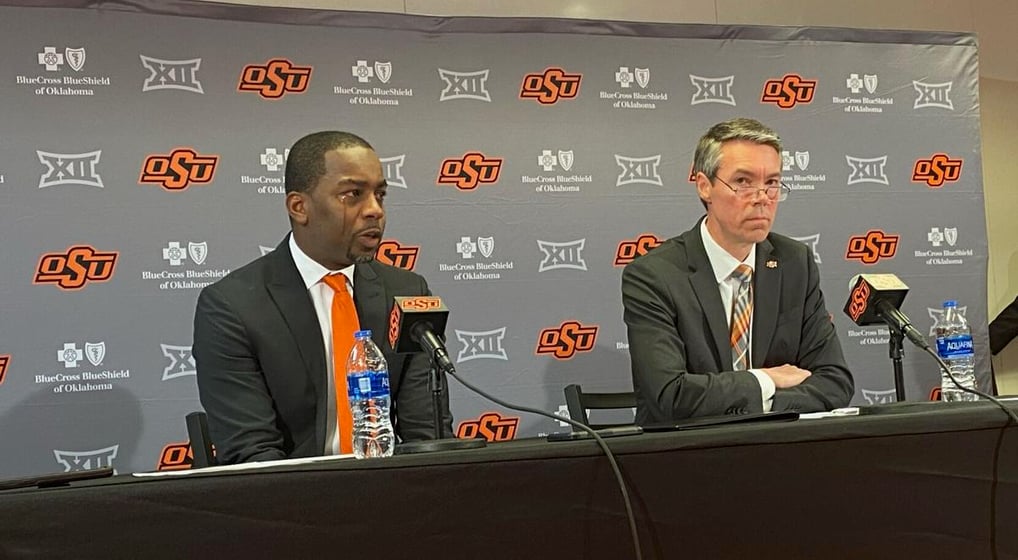 Oklahoma State Athletic Director Chad Weiberg
Opening Statement:
"I am profoundly disappointed, dismayed and disgusted by the NCAA's decision after a four-and-a-half-year process. A process that took over twice as long as the FBI's original investigation. To use this flawed and inconsistent process to take away the opportunity for postseason and the NCAA tournament from student-athletes who had nothing whatsoever to do with this case proves to me that the national office has chosen to weaponize the NCAA tournament against the very membership that has turned it into the lifeblood of the NCAA. I have a deep and fundamental disagreement with the NCAA using the tournament in this way. It is the bad actors, those that knowingly circumvent and violate the rules, that should be punished. It is unnecessary to punish these student-athletes this way and is further proof the NCAA's system is disconnected and broken. Deep and drastic changes are needed to create a better, more consistent and fairer model. We began this process with the NCAA before (Mike) Boynton had the opportunity to coach his first game as a head coach at Oklahoma State and this week we enter his fifth season. He has recruited and coached every single game with this investigation, infractions and appeals process taking place. It has not stopped, or even slowed him and this Cowboy basketball program and this decision today will not either. I want every OSU fan to know that we take playing by the rules very seriously and will continue to do so. Upon learning of the FBI's evidence, we never disputed that we employed a person that was operating outside our system and outside the rules. We took immediate action to remove him and began cooperating with the NCAA. Because of that, I am very concerned that today's decision will send a very chilling message to the NCAA membership that cooperating in an investigation with our own governing body is not in your best interest. What message does it send to the membership that you can receive a postseason ban regardless of the fact the findings found no lack of institutional control, no head coach responsibility, no failure to monitor, no academic fraud or misconduct, no participation of ineligible players as a result of violations and no recruiting violations? A decision we believe has never happened before in the history of the NCAA. What is the membership to make of a postseason ban for student-athletes five seasons after the fact because of a rogue employee who was acting solely on behalf of his personal self-interests and went to great lengths to hide it from his employer and resulted in zero advantages in recruiting or competing for the institution? It seems to me if it were applied consistently, the message the NCAA is sending to the membership is a new standard. Of course, it remains to be seen if this new standard will be applied consistently. Only time will tell, and we will be watching. In closing, I know I am joined by our alumni and fans in saying I am as proud today of Cowboy basketball, Coach Boynton and these student-athletes as I have ever been. I know the entire OSU family joins me in thanking Coach Boynton for his leadership and the way he and his program represent our institution. I know we will rally around and get behind Coach Boynton and this team. We start the season on Friday and look forward to having everyone back in Gallagher-Iba Arena this year. The future of this program remains bright. Great things are ahead for Cowboy basketball."

Oklahoma State head basketball coach Mike Boynton
Opening Statement:
"Thank you all for being here. I am disappointed, disgusted, appalled and frustrated, but somewhere in Indianapolis is a group of people celebrating. Stan Wilcox gave a directive. He sent Jon Duncan and the team to save face. They won. Our players don't deserve and shouldn't have to deal with this. Russell Register and Sherika Montgomery came here and interviewed everybody they could, and they uncovered nothing. The FBI did a job and so did we. There was a single NCAA violation. One player received $300. One player - not a recruit, not a future recruit, not a family member, one current player received $300. In and of itself because it was self-reported by us it is a secondary violation to which the punishment is you pay the money back and serve your suspension, which the kid did, and you move on. Now we're here, and Stan Wilcox and Jon Duncan and Russell Register and Sherika Montgomery and the Appeals Committee to include Ellen Farris, Anthony Jenkins, Jonathan Alger, Allison Rich and David Shipley and the Committee on Infractions - Alberto Gonzalez, Joel Maturi, Gary Miller, Vince Nicastro, Larry Parkinson, Thomas Sullivan and (Sankar Suryanarayan) - they slept well last night. They felt good about the work they did, while I explained to 17 kids that their dream of playing in the NCAA tournament this year couldn't be realized. That's shameful. There's no wonder that nobody trusts them because they get to hide behind the letters of COI and IAF, and they don't have to come do this and answer questions and talk to kids and talk to parents. The message is clear because we had one $300 violation with no failure to monitor, no lack of institutional control, no recruiting violations, no head coach responsibility, no players playing ineligible, so if you got some of those things going on, don't do what we did. What we did was we asked them that we work with them through this process. On Jan. 20, 2020, I flew to Atlanta to do the first round of this process with the NCAA. The next day we played OU here, but it was important that I be there. I went to Atlanta for no reason, to cooperate with them, to cooperate with Jon Duncan and Sherika Montgomery and Russell Register. Then this year on Feb. 7, while in Lawrence, Kansas, before a game on the day we played, we had an appeal hearing. We cooperated, we showed up, we answered their questions, and we provided all the information they asked for. So, if you're one of those other schools, be careful what they ask you for. Stan Wilcox should be ashamed that he gave this mandate because this was about trying to save face for something that was uncovered and not because of their doing. Now our cooperation has made it worse for a guy like Isaac Likekele, who was nowhere near Stillwater when this was happening. I had a young man in my meeting last night raise his hand and ask me 'Coach, what are we talking about?' That's how long this has been. They're not answering any questions today, that's all you need to know about them."