Victim Speaks About Crash on Hwy 75 in Van Alstyne 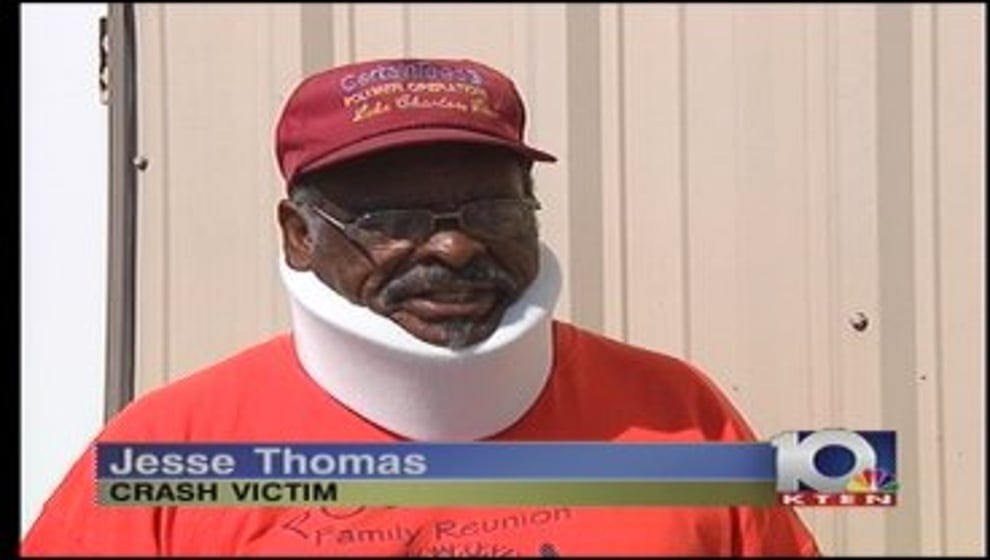 VAN ALSTYNE, TX -- A three car pile up shuts down highway 75 for more than eight hours. Two victims were taken to area hospitals. Deeda Payton spoke with one of the victims of Monday's crash shortly after being released from a McKinney hospital.

Jesse Thomas says he is blessed that he has only minor bumps and bruises and blessed that his brother is still alive. While he gives all the glory to God, he says he is also grateful to the crash cushion on the back of the vehicles they were both driving.

It's no secret that highway road crews have a dangerous job, but it's hard to believe a work day could end like this. "I was driving a pilot truck with all the lights on it with all the flashers and everything to make sure that we keep the traffic away from the street sweeper and all of a sudden I heard a bang," said Jesse Thomas, a contracted worker for the Texas Department of Transportation.

Thomas was rear-ended while following a street sweeper on highway 75. An 18-wheeler traveling about 65 miles per hour and weighing roughly 80,000 pounds hit the TXDOT vehicle behind Thomas which then crashed into his vehicle. "It hit me so hard if I hadn't had my seat belt I would have went through the windshield," said Thomas.

Thomas' brother, Michael, was driving the truck that was caught in the pileup. He was found in a ditch. "I had just lost a brother in February, and when I looked at him I said oh man there goes another one, and but when he started moving I felt better," said Thomas.

Both men were taken to nearby hospitals and are expected to make a full recovery. "I'm blessed. I'm blessed and when I looked around after I had seen what had happened to me it's like I was in another world. It seemed like things like that couldn't happen to me," said Thomas.

TXDOT employees say they take every precaution when it comes to protecting their workers. This crash cushion is designed to absorb the shock of a crash from behind which local police admit may have saved the men's lives. "They did do their job but with that type of energy that came from that tractor trailer, the drivers are in a lot better shape than they could've been if those supports wouldn't have been back behind the trucks," said Lt. Tim Barnes of the Van Alstyne Police Department.

The driver of the semi walked away from the crash. The accident is still under investigation.