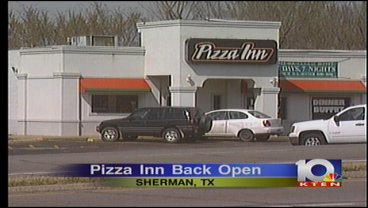 In "Behind the Kitchen Door" a popular Sherman pizzaria is asked to closes its doors.

The Pizza Inn on Texoma Parkway is back open now after several upgrades in the kitchen.

For a couple of days, customers at the Sherman Pizza Inn were turned away. That's after the Grayson County Health Department asked the restaurant to voluntarily shut down and fix several health violations.

On February 12, health inspectors found four critcal violations. Pizza pies were not being kept hot enough to protect against harmful bacteria. There was no cold water in the mopsink. Inspectors found sewage backup in the sink. And half-a-dozen gnats were found underneath the dishwashing machine.

But that wasn't all officials note on the report that several prep areas are soiled. All of these violations added up to a "C" on their most recent health inspection. At the bottom of the report, inspectors write, "Restaurant must have all violations corrected prior to re-opening."

According to Chief Sanitarian Marshall Ward that's been done. The restaurant opened back up and has fixed every violation, even buying new equipment. We contacted the restaurant but were unable to receive a comment.