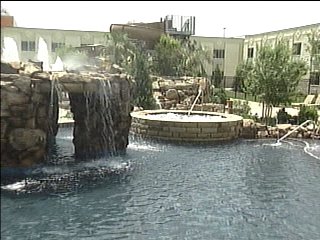 A gamble in the state of Texas that could bring in big-time casinos to the Lone Star state. We already have Choctaw and WinStar casinos north of the Red River, but this may affect what things look like south of it, in Texas. KTEN's Jhen Kordela explains.

Texans for economic development is a group that favors expanding gambling throughout the Lone Star State. The group released a poll this week stating in hard economic times, voters are motivated by jobs and the state-money expanded gambling would provide.

This could help lawmakers, including Dallas Republican John Carona, who are pushing for legislation that would authorize 12 destination casino resorts in Texas. The bill would also allow video slot machines at racetracks and wagering on Indian Reservations.

"From a purely economic point of view, casinos do generate revenue," says Scott Smathers, of Denison Development. "They have property taxes associated with them, they bring tourism dollars to the community. So, from the purely dollar point of view, as far as generating income, they come in, and they do well. If you look at what's been spent, for instance, in the Choctaw casinos, they've spent tens of millions of dollars up there in their development. And then you look at the number of tourists that come up from Texas and go there, and you get quite a few people, even our hotels are impacted."

Not everyone thinks it's a good idea, though. Texans against gambling says polls, such as the one released this week, are paid for by pro-gambling interests and are a tactic to win support in the legislature.