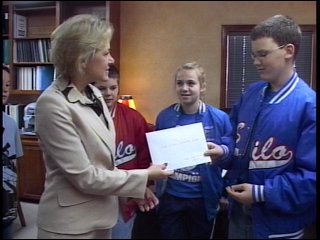 Watching the out-pouring of support for the Lone Grove residents has been a true testament to the importance of community support.  Monday, elementary students from Silo Elementary, just west of Durant, donated money they raised to the Lone Grove victims.  KTEN's Meredith Saldana has their story.

"Mrs. Miller, the students of Silo Elementary would like to present you with a $751 check to help the tornado victims in your school," says one Silo student as he presents the check.

Social Studies teacher Joan Impson says it's not unusual for her students to talk about current events before class.

But it's rare that the current event being discussed is something so close to home.

Impson overheard her students talking about the victims of the Lone Grove tornado when she heard them express the desire to reach out and help.

Impson says, "When I came into my first period I said you know some of the students were talking about it and thought we should help out and said what do you all think?"

It wasn't long until a pickle jar was placed on her desk for  donations.

Several students skipped snack for a week, collected the money and donated it at the end of the week.

One student, who was saving for a lap-top computer, donated his savings to help.

Jason Ratliff says, "Well, once I heard that other kids my age needed help I decided that this can wait because these will be around for- - that computer can be around for a long time and these people need help right now."

Erin Williams a Silo Student says, "I thought that it would be a great cause because these are kids that are just like us and we couldn't imagine what would happen if this same thing happened to us.

Aaron McKinney also a Silo student says, "The parents were getting help from FEMA and Red Cross and stuff so we thought we'd help them."

Lone Grove student Blake Miller says, "It's pretty cool.  (What's pretty cool?) Getting to meet them, getting to thank them for raising money for us."

Meri Jayne Miller the Lone Grove Superintendent says, "They were just elated,  I mean just amazed of course this whole process has been amazing and it carries over it's not just our kids but parents that walk into the office with tears in their eyes because they are so over-whelmed with the generosity of other people."

Lone Grove schools has a list of those in the district that were directly affected by the storm and say they will give the money to those who need it most.