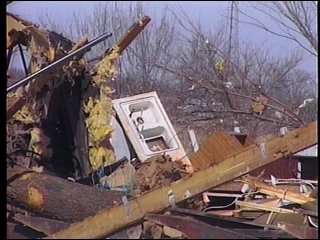 Disaster relief groups and insurance agents have been in Lone Grove talking to those affected by last week's tornado.  KTEN's Meredith Saldana spoke with a woman who lost her home that night about the process that's involved when applying for federal assistance.

Janet Cross tells me she was surprised how quickly FEMA contacted her after she applied on-line for assistance.

Janet and her husband had lived in their mobile home for 6 years before it was destroyed in last Tuesday's tornado.

Janet is a teacher in Lone Grove and said all she did was look up FEMA's website online and in less than 20 minutes she was finished.

She said the application process only took her about 5 minutes and just a few hours later a FEMA consultant contacted Janet by phone.

The consultant set up an appointment for the following morning to meet her where her house used to stand.

Janet says FEMA officials walked her through every step of the process.

Janet says, "They're just so compassionate.  Everybody just wants to help and you know you feel awkward asking for help because we've never had to do that before and it's hard and people make it so easy and they don't look down you for any of it.  It's just been like I said, God sent."

It's been just over a week since the tornado and already  the Cross' have received the check from their insurance company and say the FEMA check to cover the rest should post to their account in the next couple of days.