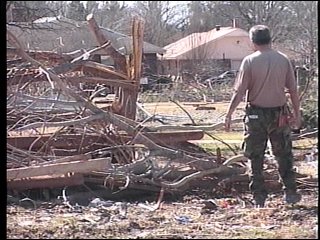 The Majestic Hills neighborhood in Carter County was also hit hard by Tuesday's tornado.  KTEN's Meredith Saldana has one family's story of survival.

Dwight Jurey says, "Just before the storm I had actually seen 40 foot pecan trees bowing like they were an archers bow in the trunk and some of those trees are gone right now.  But when that occurred I told my wife it's time to take cover and we grabbed each other under the clothes in our closet and rolled up against the wall and were safe."

Pat and Dwight Jurey said they had planned on using the hall bathroom as a safe place should a severe storm come through.

However, they're thankful they didn't take cover there because the roof caved in during the storm.

As the storm died down they came out of the closet that hadn't suffered much damage at all to find their home in pieces.

"We had to find where we used to keep our flashlights," says Jurey, "And hope they were still there and each step you would take you would thank God that you were still alive."

Neighbor Murrel Logan's house was split in two when the tornado traveled right through his living room.

Logan says, "I kind of went numb to tell you the truth.  I really didn't have any thoughts for a while.  My wife too, she said I'm not gonna cry, but she did."

The small neighborhood suffered extensive damage but the Jurey's say it could have been worse.

"We feel extremely blessed.  We have insurance, we have means, we're retired.  The people in Lone Grove need our prayers and whatever we can give them.  I'll be busy a little while but that's the way I feel about it."

Residents say it'll take time but they will rebuild.