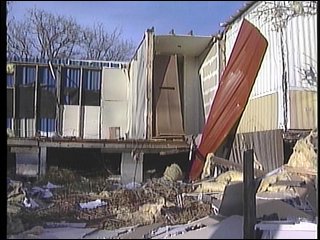 According to Lone Grove City Manager, Marianne Elfert, 118 homes were destroyed in Tuesday's storm. KTEN's Jhen Kordela spoke with one man whose home was in the line of the tornado and has his story.

You may remember Casey Clinton of Lone Grove. KTEN reported his story just more than a year ago, fighting an illness that doctors could not identify. Now, he's facing a new struggle, cleaning up the mess of Tuesday's deadly tornado.

"My former pastor and his wife was down for the funeral," says Clinton, "or I'd have been in the bedroom, and i'd have been gone."

Clinton says he'd usually be asleep at the time the tornado hit. But, Tuesday evening he was sitting in his living room watching TV with guests, following his grandmother's funeral that afternoon. Now, he's lucky to be alive. The storm took out the back of his house, where he usually sleeps in his bedroom.

"I wasn't hit as bad as a lot of people, but it just hurts," says Clinton. "I mean -- you know what I'm saying. I'm more fortunate than others, I do have a shelter to go to. But at the same time, it's just a mess to pick up stuff, when you can't hardly pick it up, you know."

Clinton spent every penny he had on medical bills and accumulated substantial debt while trying to find out what made him go from 220 lbs. to less than a hundred. Because of his financial situation, he had to find a cheaper place to live. Now, he's looking for a new home, once again.