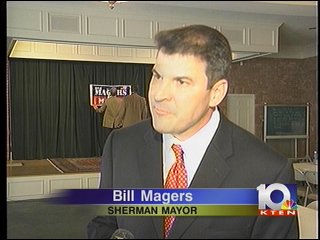 Elections for city positions in Grayson County are only a few weeks away.

Both Sherman's and Denison's mayors are planning to run for re-election.

Friday in Sherman, Mayor Bill Magers officially announced his plans to run for a third term.

"I think there's really three reasons for running. Number one, we want to fulfill our commitment. We've got a lot of capital improvement projects in the works right now. I think it's important to see them to fruition. Number two we need to continue our long term planning the economy is iffy right now and number three we need to protect our water," said Magers.

If you're interested in running for a school board or city council position in Texas, you have until March 9th to file.

Election Day is May 9.