50 Jobs Up for Grabs in Denison - KTEN.com - Texoma news, weather and sports

50 Jobs Up for Grabs in Denison 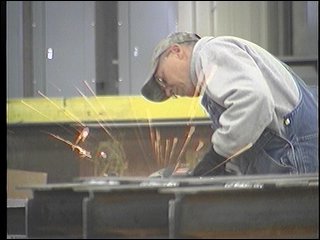 Citing the weakening housing market, the Alcoa plant in Denison was forced to shut it's doors laying off hundreds of employees, but since then, ACS, a company that used to be based out of Sherman, has moved in, and offered about 100 job opportunities.

Johnny Higginbotham, who used to work construction, says he feels blessed to have found a job in this current economy.

"You see lots of people that are still looking, lots of layoffs, big companies that are laying off people, even small ones, ranging from manufacturing to construction, so to see that it feels very nice to be employed."

Owner Dan Knox says they've hired about 50 people since June and still have another 50 positions to fill.

"We know there are tough times right now going on in the economy, and we've been fortunate that our business has done very well, and it continues to grow. "

Denison Mayor Robert Brady toured the facility. He says they've worked hard to recruit companies that are looking for employees

"As an economy being down, people looking for jobs, and not having a place to look, but we have a place. It's a very very positive thing for the community."

They're looking for engineers, laborers and craftsmen.

To apply visit the facility at: 1601 Commerce Blvd, Denison, Texas, or click here.