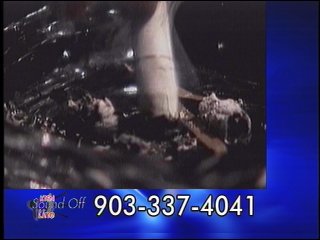 KTEN's viewers were concerns about our constitutional right to bear arms and restrictions on smokers in restaurants. Here's a sampling of what you had to say.

"Hi. This is Tommy, calling from Ada, and I would just like to say that Obama is going to be one of this country's greatest presidents, and he is not going to put a ban on assault rifles. I believe in the second amendment. It's there to protect us. It was put into place by our forefathers, and it will not be taken away."

"This is H.D. Williams, here in Denison, and I think they ought to allow people to smoke in a smoking room with no ventilation. No one allowed in that room under 18 years of old - of age - excuse me. Let 'em smoke until they drop."

"Yes, this is Jeanette, and I'm from Sherman, Texas. And I don't think it's right for them to cut out smoking and everything, because people that don't smoke... then they have the most advantage of everything. And people that do smoke, they won't be able to smoke, and that's not fair."

Are you passionate about a subject?

We'll air some of your comments, too.