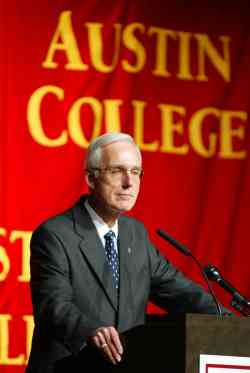 Page penned the third chapter in the series, titled "Leadership in the Liberal Arts-Community and Culture." Full text of the chapter can be found at www.presidentialperspectives.org.

"When searching for contributing authors, Dr. Fennell and I looked for experienced and innovative presidents with established reputations in the field who could share their valuable insights," said Scott Miller, president at Bethany College in West Virginia, who serves as co-executive editor of Presidential Perspectives with Marylouise Fennell, senior counsel for the Council of Independent Colleges. "Dr. Page is a highly respected president whose wisdom is respected by his peers nationwide. His many years of experience and success in higher education made him a prime candidate for our topic on leadership."

Page has served as president at Austin College since 1994 and was the president at Austin Peay State University in Clarksville, Tennessee, the previous six years. Page spent ten years at Lander College in South Carolina, where he was provost and vice president for academic affairs and was appointed acting president for a term. He also served as dean of the college at Wesleyan College in Macon, Georgia, and was a member of the history faculties of the Universities of Georgia and Western Kentucky.

ARAMARK Higher Education, which publishes the series, is a dining, facility, and conference service for more than 600 colleges and universities throughout North America. For more information, visit www.aramarkhighered.com.

Austin College is a leading national independent liberal arts college located just north of Dallas in Sherman, Texas.  Founded in 1849, making it the oldest institution of higher education in Texas operating under original charter and name, the college is related by covenant to the Presbyterian Church (USA). Recognized nationally for academic excellence in the areas of international education, pre-professional training, and leadership studies, Austin College is one of 40 schools profiled in Loren Pope's influential book Colleges that Change Lives.