One Year Later: Love County Liquor By The Drink 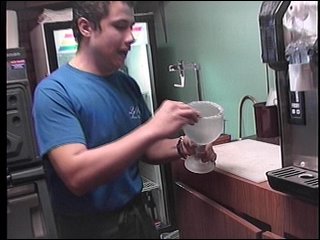 Well it's been one year since Love County restaurants and bars were first able to sell liquor by the drink.  It was a controversial issue last year, whether or not to allow the sale of liquor by the glass.  But one year later restaurants say it's been good for business.  KTEN's Meredith Saldana reports.

La Roca Mexican restaurant in Marietta says the margarita is the most popular drink sold at their restaurant.

And their glad Love County residents voted for liquor to be sold in restaurants and bars.

Last year many people had mixed feelings about the mixed drinks.

But it seems it's been accepted and it's helped business in the area.

Love County resident Elizabeth Beavers says, "I like it I mean it does good for the business."

Falconhead Lounge's Junior Andrews says, "It has picked up with more customers coming in, sitting down and having their drinks.  It's worked real well."

The Falconhead Lounge says they've enjoyed the pick up in business and their customers have enjoyed the ability to drink their mixed drinks in the lounge.

Andrews says it's expensive to apply for the liquor license and it can take up to 3 months but the businesses I spoke with said it was worth it.