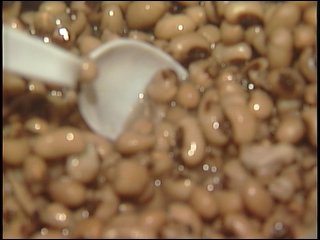 It's officially 2009. And if you want it to be a prosperous, happy year... you may have gobbled up some good luck food. Black-eyed peas, ham, doughnuts... There are all sorts of traditions Americans follow, hoping to bring good luck in the new year. KTEN's Katy Blakey explores some of those traditions in this week's Behind the Kitchen Door.

With a bleak financial forecast for the new year, many folks may be doing whatever they can to bring better luck in '09.

The new year's eve smooch, the bottle of bubbly, and on new year's day: the good luck food.

Most people try to swallow at least a spoonful of black-eyed peas.

Robin Stapp says, "For good luck on the new year; we've done it as long as I could remember."

Theresa Ford says, "I try to eat the black-eyed peas for good luck, but that doesn't always happen."

We do it, but no one really knows why these peas brings good luck? Some say it dates back to African traditions and slaves living in America continued it. Others say southerners adopted it during the Civil War after General Sherman marched from Atlanta to the sea, striping the countryside of crops and livestock but leaving the field peas behind.

Collard greens, cabbage - even doughnuts - are some of the many things people eat for good luck.

Roy Bravo of Sherman says, "Oh, black-eyed peas and ham and sweat potatoes ... are pretty much the tradition."

Leslie from Sherman says, "Black-eyed peas and cabbage and ... What else do I have? Macaroni and cheese."

Store manager Valerie Estrada says, "That's our tradition. Up north is the sauerkraut and pork. You don't see a lot of that down here in Texas. It's mostly pork jaws, hog mos, black-eyed peas, chittlings and greens. It's mostly this time of year in this part that."

Here's a look at what those foods mean:

And in Scotland, anyone you visit at the first of the new year is suppose to receive a fruitcake.

For Behind the Kitchen Door, Katy Blakey, KTEN News.