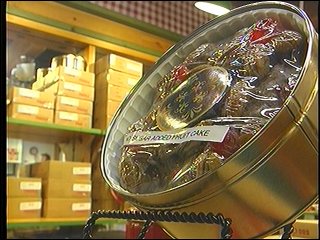 It's survived the fall of Rome, Johnny Carson's jokes and the U.S. Postal Service. Every year millions of Americans ship fruitcakes across the country to loved ones who like them and some who do not. So how has the cake with the questionable taste made it all these years? Here's a look at the fruitcake in Behind the Kitchen Door.

From "The Fruitcake Song" to the "Fruitcake Lady" to yes, even a fruitcake toss in Colorado -whether you like the dessert or not one thing most can agree on - it has spunk.

To find out just what keeps the nutty dessert returning year after year we asked the experts at Sherman's Yahoo! Outpost Store - a major supplier of these controversial cakes.

"Well, because they are so good," said Helen Osteen.

On Christmas Eve, last minute shoppers flooded the store, scooping up fruitcakes. Proof that somebody is eating them.

"I've had some families tell me that that's the family joke. They give a fruitcake to someone and the next year it makes the rounds and goes on for several years. But most I think give them because they know the person receiving them will like them."

Yahoo! boasts their cakes are moist and rich, made with quality products -- not tough like the ones that live through the fruitcake toss.

But these cakes are tough enough -- strong enough to survive a slumping economy. Sales at Yahoo! are steady, proving once again the fruitcake can survive anything - even a recession.