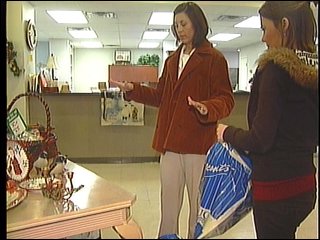 Many say now is the time to buy ads, because chances are you'll get a better deal now that advertisers are hungry for business.

Ronnie Cole, the owner of Crouch Home Furnishings in Denison says business there has slowed down because of the current economy. The sluggish market has even forced one of their competitors to shut its doors.

Cole says, despite the slow down, his funds set aside for advertising should remain steady.

Cole says, "One of the first things people do when the economy goes bad is look at budget cuts, and cut advertising, and that's the worst thing they can cut because when the economy does turn around, your name is not out there in front of the public. You name has got to be out there constantly when they get ready to buy a recliner, sofa, washer, dryer, they'll look for people they see on advertisements."

KTEN Sales Director, Ken Braswell, says, "Actually, in a down economy, alot of large companies step up advertising because they find when small companies cut back in advertising they can get alot more for money."

Many business owners are also turning to online advertising, and encouraging employee blogs.