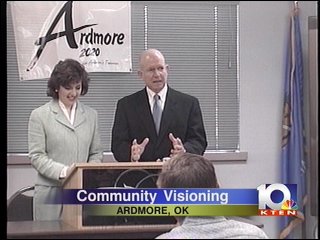 It's been 10 years since the Ardmore Chamber of Commerce held the "Ardmore Tomorrow"  community visioning process.  A process that brought Ardmore it's Convention Center.  It's that time again.  KTEN's Meredith Saldana reports.

This decades meeting is being called "Ardmore 2020" and the Co-Chairs are asking for the communities help.

They want to know how the community feels Ardmore is currently doing and where they'd like to see Ardmore in 2020.

The chamber of commerce says retail sales in Ardmore for the month of November were up 9%.

A sign that despite the recent lay offs our community is still bucking the national trend.

Co-Chairman Rick Baggett says, "I think the pendulum is gonna swing.  I am a great one for hope.  I think as bad as we think things are now and they might get a little worse that the pendulum's going to swing and the economy's going to improve."

Co-Chairman Jessica Pfau says, "But again, we don't know what the Ardmore community's thinking about and what their priorities are.   That's why we want community members to come to this because we need to know what it is that you want where do you want Ardmore to be?  I know what I want but that isn't necessarily what a community member might want and we need to hear from everyone."

The first step the community can take is to visit the Ardmore city website and print out a community survey they can also be found at several area stores.

Fill it out and send it to the chamber of commerce.

The second step is to attend one of the 5 meetings to be held at the Ardmore Convention Center on January 15th and 29th, February 12th and 26th and March 12th to voice your opinion.