Family Fights DHS for Custody of Their Child 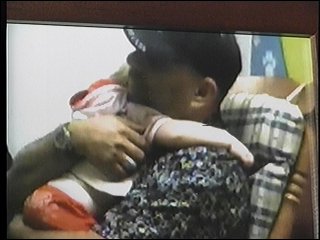 The couple moved to Oklahoma from Dallas in September. They say they were looking forward to a new career, and a new home, but just a month after their move, their worst nightmare began.

On October 29, 18-month-old Samantha Webb was allegedly ripped from her father's arms and taken into DHS custody. Samantha's father, Christopher Webb, says the drama began after he and his wife, Brandy, decided to move to Oklahoma for his job.

Christopher Webb is a sex offender. He was sentenced in 1997 to 12 years for a crime records show he committed with a 12 year-old girl.

Webb says now that he's completed his sentence, there are no laws keeping him from being with his daughter.

"I'm done with everything I was supposed to do and my daughter was home, safe, happy, she's loving, we love her, and she's hurting now, and we're hurting, and it's an injustice being done to us."

Brandy Webb was advised to make a home for her daughter in Texas, so she has, moving nearly 100 miles away from her husband in Durant to grapevine, but still, Samantha has not been returned home.

"I don't know these people taking care of her right now, and I don't know she's being properly taken care of."

Cristopher Webb says, "It's not about me, it's about my daughter. I love her, and she needs to be brought home. Her spirit is gone, her laugh is gone, her smile is gone. She's hurting and sad. I understand she's 18 months old but a baby can be depressed."

Brandy Webb says, "This is our worst nightmare coming true. Our daughter has been ripped from us with no cause. I just want her home."

Christopher Webb says, "They take kids for any reason without just cause, without due process, and it's here in Durant that they're doing it."

Brandy Webb says, "I'll never step foot back in the state of Oklahoma."

A judge decided to transfer the case to Texas. Samantha has not been released yet, but the Webb's say they are hopeful she'll be coming home soon.

We've called DHS, yet they tell us they cannot comment on the case.