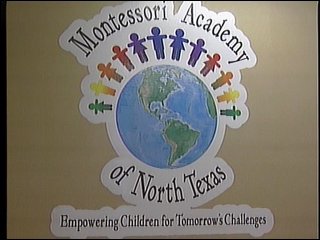 The ailing economy is affecting enrollment at private schools. KTEN's Deeda Payton reports on a local Montessori school that is caught in the trend.

The Montessori Academy of North Texas in Sherman was experiencing a 20-percent growth up until this year. Academy Director, Angela Magers, says they aren't growing, but they aren't hurting either. Their enrollment rate has just leveled off. "In the last 45 days there's been an impact, again minimal, but parents have to make choices and you know we have lost a few families and it has all been attributed to job losses."

"We're having to tighten our belt a bit, but it's right up there at the top priority. Even when we look at bills and mortgages...even though she is only 22 months, that development is so important." Diana Richards, a stay at home mom, says she is now looking for work to create a dual-income household that would help make ends meet. She says she would never skimp on her daughter's education.