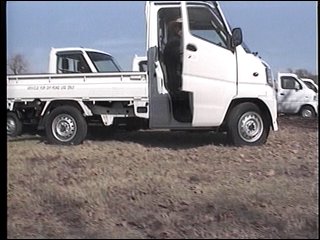 Mini-trucks, they're from Japan and are becoming increasingly popular here in Oklahoma and Texas.  One reason is the tiny trucks get about 40 miles per gallon making them gas sippers that are now street legal in the state of Oklahoma.  KTEN's Meredith Saldana has more.

In Japan, the trucks have been used for everyday travel and work since 1962.

The trucks can go just about anywhere an ATV can go and are ideal for farmers and ranchers who need a quick little truck to take them anywhere on their property.

Mike Olinghouse was the first distributor in Texas and Oklahoma and says for being similarly priced to an ATV you just can't go wrong.

He also adds that sales went up when gas prices hit nearly 4 dollars.

"Yeah farmers and ranchers and quite a few hunters during hunting season like it is now. Well, we get calls pretty regular from guys wanting them.  I've had guys calling from deer stands that have seen one at the hunting camp they're at and of course they wanna have one nicer than Bill's."

Olinghouse says the they started their business 5 years ago and the trucks were very slow to take off.

The tiny trucks start at about $5,000 and some people go all out adding rims, camo paint jobs and off roading equipment making these trucks look like life size toys.

Olinghouse warns: Although they are street legal they are small and light with no impact crash studies.