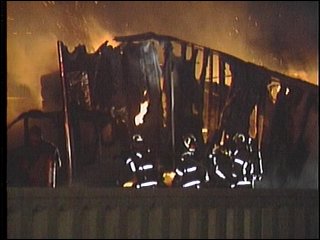 Two semis collided around nine o'clock on Tuesday night, on the Red River Bridge, one catching on fire. The bridge opened Wednesday morning, after being closed all night while crews worked to clear the scene. KTEN's Whitney Allen was on the scene and has our story.

Kevin Harris the area TX Dot Engineer says, "We got a call at 10 Tuesday night to come check out the structure damage. We got here and need to check it out until they get it cleared off we must monitor the situation."

Harris was called out after two semi's collided in the southbound lanes of the Red River Bridge. Harris says, "No injuries, but three vehicles were involved."

One of the rigs caught fire, and that's what took crews so long to clear the scene. Harris says, "They probably have another 30 minutes to get the equipment off, and clear the diesel."

After 11 hours and 20 minutes the bridge reopened just after 8 Wednesday morning, safe and ready for commuters.

Harris says, "There are some minor damages but nothing critical." Once again no one was injured and the bridge is reopened.