Early Voting Overlaps in Texas and Oklahoma: What Voters Have to Say - KTEN.com - Texoma news, weather and sports

Early Voting Overlaps in Texas and Oklahoma: What Voters Have to Say 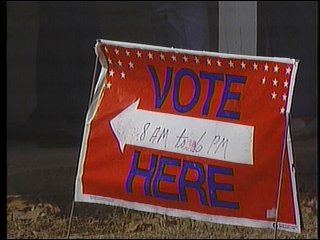 Early voting overlaps in Texas and Oklahoma. KTEN's Deeda Payton reports on what voters are thinking. Today is the last day of early voting in Texas and the first of three days in Oklahoma. And, there is no shortage of voters in either state.

The doors to the Grayson County Courthouse didn't stop swinging all day. The climb up the stairs didn't seem to deter anyone. Once inside, local voters say it was a smooth and easy process since they already had their minds made up about who to vote for.<I"m gona vote for McCain. "At this point I just think it's very important that everyone come out and express their opinion and you can't complain if you don't get out there and express your opinion." "I don't really register one way or the other, I voted what I believe." "The process was great, it was fast, the lines went quick and there was a lot of help inside as well."

The first day of early voting in Bryan County wasn't quite as convenient, the line wrapped around the election board and into the parking lot. Voters say they waited about an hour on average to cast their ballots because there is only one computer. Nobody seemed upset about the wait, just passionate about their candidate of choice. "I think they should come out and vote because John McCain needs to be president of the United States." "Looks like here and everywhere the Democrats have a little edge, we hope not." "I think people have pretty strong opinions and that's what brings people up here and that's how a democracy works."