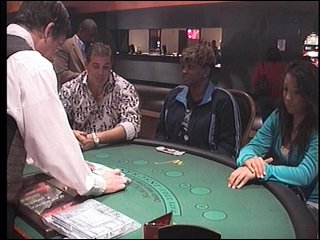 Many businesses are struggling to stay afloat during the current economic crisis but, for one local business that's not the case they're expanding.  It's news that's good for our economy.  KTEN's Meredith Saldana reports.

The Winstar World Casino started as a small bingo hall back in '91 and even despite the national financial crisis they have continued to grow.

Winstar is expanding and just announced they will be adding 400 new jobs.

The project will be complete in December making it Oklahoma's largest casino.

Brian Campbell, CEO of the Commerce Division of the Chickasaw Nation says although the economy is at its worst , Winstar hasn't been affected.

In fact  their revenue sales for this year are up.

Gamblers from Texas say they're just here to have a good time.

Customer Fred Robeson says, "It doesn't bother me, when I come to have a good time I don't care about gas prices or whatever.  Besides I'm here to win money not lose it."

Inez Thornton of Dallas says, "And I come out because I think I'm just a born gambler."

Winstar currently has more than 2,400 employees and roughly half are from the north Texas area.

And new this month, employees making under $50,000 began receiving gas vouchers in the amounts of $25, $50 or $70 depending on the distance they drive.

For information on jobs available go to www.winstarcareers.com.