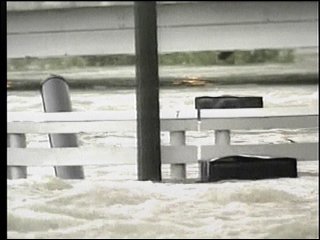 Those in North Texas with loved ones in the direct path of Hurricane Ike are watching the storm closely. KTEN's Whitney Allen met with one North Texas resident, originally from Beaumont, Texas and has the story.

As the hurricane heads north, so do the evacuees. One Denison hotel says, over half of their rooms are booked with people seeking shelter from the storm. Ryan Sylvester, an employee at the hotel explains how he's been able to relate with his guest, and the manager at the hotel, says the are offering a bit of relief.

Ryan Sylvester says, "I moved here from the Beaumont, Port Arthur area. Over the weekend I have run into people I know from my original town, including an elementary school teacher. I know what they are going through, because I have been there myself.

Niki Elkins, the hotel manager says, "We are helping the best we can. We have been offering a discounted rate to evacuees. We know times are hard and their is no tax on the rooms."

The hotel says they are expecting 5 more families tonight, and are offering pizzas to the evacuees.