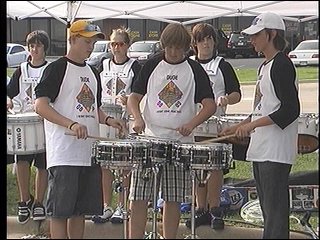 The Denison Drum Line Team is trying to make history by breaking the world record for the longest drum roll.

To make it happen at least one student will have to keep drumming for over 24 hours and 18 seconds.

Sophomore Cody Clapp says, "We're definitely going to break it. There's no question about it."

Junior Matt Neff says, "Nothing has ever been done in Denison this amazing. It's a really good feeling."

Eight grader Joshua Apodaca says, "I'm just worried that all of a sudden everyone's sticks are going to break at the same time and the roll is going to be down, but what are the chances of that?"

The idea came from coach John Apodaca, who'll be cheering on the team at the Denison Wal-Mart.

"I am going to tell people, okay, your stopping now, do not stop until I physically tell you to stop."

So by how much time is the team attempting to break the record? Apodaca says, "Some people want to go 25 hours, just to put an exclamation point on it. I am in support of going for like 5 more minutes and lets just go home and go to bed."

The team is encouraging people to come out and support them. They'll be collecting money for their private lessons fund.