Bearcat Band Sizzles in the Sun 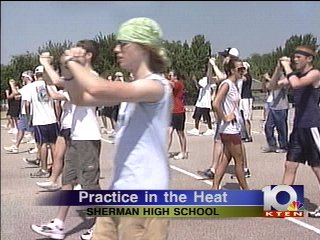 Local high school bands are sizzling in the sun.

With temperatures climbing into triple digits, student health is a top concern.

Sherman ISD's Director of Bands, Ryan Jenkins, says, "Believe it or not it's not the physical exertion, it's the heat that they have the most trouble with. So getting out into it is something they've been told to do and have been doing it on a pretty regular basis, for about two weeks now. So they've been conditioned before they came to expect and pretty much know that this is going to happen."

Sherman's football and volleyball teams are scheduled to start two-a-days in the heat next week.