How to Get Help: Angel Food Ministries and The Salvation Army - KTEN.com - Texoma news, weather and sports

How to Get Help: Angel Food Ministries and The Salvation Army 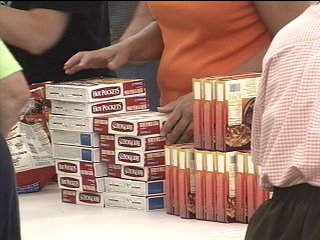 Pinching pennies in this slumping economy can cost families more than they save.  For those struggling to get by, basic needs are often sacrificed; but, in a community committed to lending a hand, there are places to go for help.

"You know, with gas prices and everything going up it's just hard to buy food and actually survive, " said Sarah Deel, Angel Food Ministries Participant.

Many Americans are trying to do just that, simply survive in a slumping economy.

"We have young mothers who are trying to raise their children alone, we have elderly couples, we have grandparents who are raising their grandchildren, " said Marlene Forsythe.  "People from all walks of life who for whatever reason need help meeting their whole living costs."

For those who are burdened, giving hands are there to help.

"Angel Food Program has been going on for several years," said John Kinsey, Pastor at The Church of the First Nazarene.  "I have just known about it since I came to this church in January '07.   What it is, it started in Georgia with neighbors helping neighbors, and it just grew into this enormous ministry."

On both sides of the red river armies of volunteers, young and old, are up before the hot summer sun filling boxes full of food.

"Angel Food Ministries really helps people who are struggling because you can get a box of food for 31 dollars," said Annette White, First Christian Church, Denison.

A box of restaurant-quality food will feed one person for a month or a family of four for a week for just 31 dollars. The same food in the store would cost you from 50 to 70 dollars.

"You don't have to choose between your electric bill and food, and you don't have to start thinking about well, I'm going to have to survive without food so I can pay gas to go to work," said Deel.

One of the best aspects of the Angel Food Program is EVERYONE qualifies.

"There is no restriction, we take any and all," Kinsey said.

Herb Holland with The First Baptist Church in Howe, a North Texas host site, said the response can be overwhelming.

At The First Church of the Nazarene they're seeing the same response.

"Oh my, we haven't even tapped meeting the need in here Durant," Forsyth said.  "There are so many people who do not have enough money for the food they need to buy their families and we hear every month, "we don't know how we would make it without Angel Food.""

Some families, though, need more, and the Salvation Army steps in.

"People that aren't normally finding themselves in these types of situations are now, and it's hard for some of them to come, they've never been in this situation before, and there is a lot pride," said Capt. David Grigsbay, The Salvation Army.

Pride aside, the Salvation Army can help with utilities, rent, food, clothing, and emergency shelter, among other things.

"Rarely is the lobby empty, and a lot of the folks have been here before, some of them have been here as early as 2005/2006, but we're seeing an increase in first-time clients," said Donna Waters, Salvation Army Social Worker.

"When we break it down as far as single men, and this many have to do with the emergency shelter, there has been a 130 something percent increase over the last year and with single women 177 percent increase, that's more than half of what we saw last year," Grigsbay said.

"The demand is so great for people that are just desperate," Waters said. "One of the most beautiful things I saw recently was a young mother come in and ask for food, and she said this is the last time I'll have to ask and she had a thick chart, and I said why is that, and she said because next week I graduate from nursing school."

"We are basically full time, Monday through Friday, our office is open to interview people that need food, that need clothing, rent and utility assistance when funding is available," Grigsbay said.

The Salvation Army is located at 5700 Texoma Parkway, Sherman, TX.  To contact them call