One on One with Lester Bower on Death Row - KTEN.com - Texoma news, weather and sports

One on One with Lester Bower on Death Row 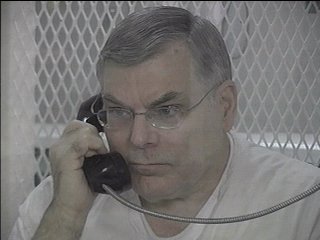 As of Thursday, the defense will have a week to supplement today's arguments, and then prosecutors will have another week .

Bower says, "Time is all I got, until next month."

Mason says, "He said okay you can ask me anything you want to ask me and I'll tell you. I have nothing to lose."

Mason says Bower has no animosity toward the jurors who convicted him, but has been waiting for DNA testing of evidence to set him free.

Mason says, "Nobody really knows except Lester Bower and the victims, and if there was someone else involved.

As of August 26, 2008, Mason has pulled his full un-edited interview from our community contributed website, MyTexoma.com