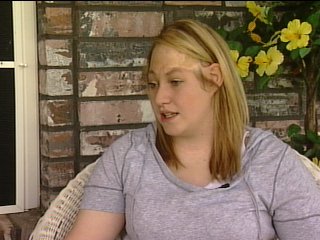 It's a condition that every year will affect one thousand new born babies. Cutis aplasia; it's a lethal birth defect, with the child missing parts of the skull and scalp.

Given only 10 days to live, how would you spend that short time with your little one? KTEN's Whitney Allen has the story of an area family that had to face this terrifying reality with their small daughter.

Meagan's father, George Breeden, says, "It was an experience I hope no one else ever has to go through."

Meagan's doctor, Craig Hobar, says, "She had one of the worst cases in the world."

Mrs. Breeden says, "I felt helpless. I was devastated."

Dr. Hobar says, "She was born with no scalp, no skull, no covering of her brain. She had her brain totally exposed, it was a really challenging thing where some people thought she had no hope."

Mr. Breeden said the search to find someone to save Meagan's life wasn't easy.

Dr. Hobar adds, "I really was scared for her and her family but always had a sense she was going to do it."

Dr. Hobar says, "In normal cases, it's a defect so you have adjacent skin to take, but she was too young to take skin from other parts of her body. With the right care and medication, she regenerated the tissue herself which really was a medical miracle."

For a child who was only given three weeks to live, Meagan Breeden - now a sophomore at Durant High School - has beaten the odds.

Meagan says, "I just remember being in the hospital all the time, back and forth from Ronald McDonald and having surgeries."

Mrs. Breeden says, "With over four months spent in ICU immediately after being born and over 50 surgeries, Meagan's journey has been anything but stable."

Meagan's parents were with her every step of the way, changing dressings daily to keep infections out.

Meagan has spent the majority of her life wearing these dressing on her head.

Meagan says, "But people would stare. But it never bothered me, and still doesn't now.  I just got to where I'd say, 'I was just born like that. It's just who I am.'"

Mrs. Breeden says, "Dealing with kids can be so brutally honest, she had wonderful days and terrible days. But she always had a smile."

Meagan's own confidence and bubbly personality has made her friends forget that she is any different from them.

Meagan says, "They look at me like a normal person, they don't see me differently, don't stare, don't ask questions."

Eventually, Meagan lost the dressings and changing up her looks.

"I had a surgery and decided, 'I'm not going to wear it any more.' I had hair on my head so... This is funny: we had a family bonfire, I just got rid of some of my hats and haven't worn them since."

Blond hair, make up, and getting ready to drive, Meagan is normal high school girl.

Mr. Breeden says, "She is our miracle, in all honesty. We started at no hope to driver's ed July 26th."

She loves sports and is excited about her new job with the Lady Lions basketball team next year.

Meagan says, "Yea, I get to travel with the team, be a part of it. It's just really fun."

And when I asked her how she overcame so much by the age of 15...

"My dad and family, obviously. And Dr. Hobar, for being there even when there could be a risk."

Now, Meagan is not too worried about, what the future may bring, because after all this 15 year old girl has already jumped some major hurdles.

For the HealthWatch, I am Whitney Allen, KTEN News.