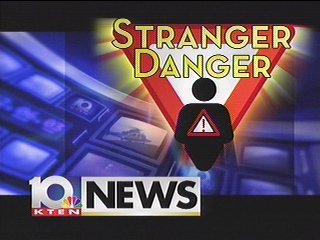 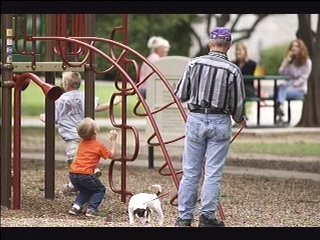 Predators could be trying to lure your child in person or on the Internet.

We begin with a look at what could happen to younger children, if someone were to try to lure your from the playground. It's an encore presentation of "Stranger Danger," a report that won an award of excellence from the Lone Star Emmy Association.

It's got to be one of the most terrifying feelings for a parent. You turn back for a second, and your child is gone.

It can happen anywhere, at any time.  A stranger can approach your child, coax them into a car and leave..all in a matter of minutes.

To find out just how easily it can happen, we visited Fairview Park in Sherman. Under the supervision of Sherman police, our photographer Dave Potter, posed as a stranger with a puppy.

Meet four year-old Kylie Harmon. We talked with her mom before our experiment and she agreed to let us test her children.  Just minutes after, Kylie approaches our stranger.

"There goes one little girl, kids are naturally attracted to animals," said Sgt. Bruce Dawsey, Sherman Police Department. "And it looks like the little girl is going to follow. And this is what's scary."

"And that, ladies and gentlemen, is how quick it can happen," Dawsey said.  "This is why it's important if your kids are big enough that you let them wander around the park without keeping a constant eye on them, it's important to teach them about stranger awareness. He could have easily loaded that little girl in the van and been gone with her in a matter of minutes."

"It was very interesting, it was a little bit disturbing to see how easily she just walked right off," said Clare Harmon, Kylie's Mother.

"Did you play with the puppy? I like it but mommy said not to do anything with it," Kylie said.

Kylie's older sister, Courtney, also went with our stranger to the van.

"Did you think you were in any danger? No. Why not? I just didn't think about it," Courtney said.

Meet Peyton Graves.  She approached our stranger, while he was still talking with Kylie.

"Now we have round two," Dawsey said. "The first little girl had the dog and the other one saw it and thought that it must be ok."

Once again, within minutes Peyton was on her way to the van with our stranger.

Peyton's grandmother says she talks to her granddaughter about strangers, but Peyton didn't know she was doing anything wrong.

"Did you go with someone you didn't know? Well, I like the puppy. Did you know he was a stranger? No, he didn't bite," Peyton said.

"It was scary, even though I had talked to you and knew it was all just a game, it was really scary." said Carol Neckar, Peyton's Grandmother.  "I almost wanted to run and check on her because when I bring her to the park I don't let her out of my sight."

"We've been reading stories. I read her the Little Red Riding Hood story and about the big bad wolf and about him being the stranger and kind of used that analogy with her but apparently its not sunk in quite yet." Neckar said.

Sgt. Bruce Dawsey says talking to children about strangers is good, but he says children need to understand that strangers aren't always scary.

"When we talk about strangers, I heard you give the example of Little Red Riding Hood and when you're picturing the big bad wolf, we're picturing something with long hair and big teeth and something scary looking, but we're not picturing Dave who looks like somebodys dad or grandfather with a cute little dog," Dawsey said.

Each person we spoke with told us they have talked to their children about strangers, but after watching what happened at the park, they say they'll talk to them again.

"I think we need to role play with her, I've seen this on TV before and about people role playing with their children and I think that's a really good idea because I think in order to learn it they really need to go through the motions, just the story is not good enough or just talking is not enough," Neckar said.

When it's time to talk, here are a few tips:

While predators may lure younger children with items like animals or candy, those preying on teens use the power of emotion, often times over the Internet. They offer their attention and friendship, all with the click of a mouse.

Michele Ratcliffe is an assistant U.S. Attorney, prosecuting cases in Plano and Sherman.

In fact, the number one term searched on the Internet is sex.

We'll go deeper into online solicitation, including what's being to stop it, and what you can do as a parent, to keep your children safe, in Part Three of our Special Assignment Report.