Could You Be Living in a Former Meth Home? - KTEN.com - Texoma news, weather and sports

Could You Be Living in a Former Meth Home? 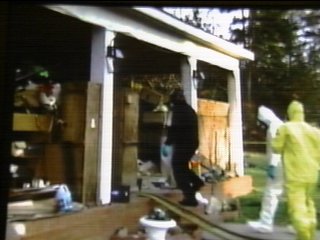 The DEA calls methamphetamine the most dangerous drug in America because of the overwhelming effects it has on users, the enviornment and the innocent children and adults exposed to it.

The drug can be made anywhere. From homes and apartments, to motels and storage units, toxic chemicals are left behind, long after the user is gone.

Tonight, KTEN's Katy Blakey explores how this dangerous drug could be inside your home, affecting the health of you and your family.

"You have a fire hazard. You have a poisionous hazard, a caustic hazard, explosion hazard. There is just an untold number of hazards in one of these sites."

More than 5,000 dangerous meth lab sites were found in 2007. Several discovered right here in our region.

"Yes, we have seized homes," said Whitney. "Some the other houses we've gone into we've had to gut. People come along behind ours and gut the entire structure. They just had to. There was too much contamination to patch it over."

Once the evidence is collected, and arrests made, the site still stands. DEA reports say for every pound of meth produced, five pounds of toxic waste can be absorbed by the walls, the carpet, and lingering in vents.

"Those hazards still exist. There could be chemicals that could make you sick or in worst case scenario kill you."

New residents can move in and never know their home is a former meth lab.

"I think there is a lot of people who don't know."

But a new law in Texas is changing that. Beginning this year, if you are selling a home in the state, you must disclose if your home was ever used to manufacture methamphetamine.

To decontaminate the home and make it livable, homeowners call in haz-mat teams like the one Kalyn Peterson runs, Anubis Scene Clean.

While haz-mat teams are shielded, and more buyers may be aware, the new law is not protecting everyone.  Only homeowners selling their property must disclose a previous link to meth.

Banks selling foreclosed homes do not. Those renting apartments or houses don't have to either.

"They don't want people to know that there site is a meth lab," said Whitney. "They can't rent it."

A spokesperson for State Representative Veronica Gonzales (D - McAllen), who sponsored the  law, says this is just a start. That the first bill on the matter could not be too broad, and more changes could be made in the future.

Peterson suggests talking to neighbors, the local police, and researching the title to find out if you're about to purchase a meth home. And, if you think your home may be contaminated, spend the few hundred dollars to have it tested.

"The problem with meth labs is since you can't see it, can't smell it," said Peterson. "Even if the law says they have to disclose it, there's nothing that's going to make them disclose that it was a meth lab."