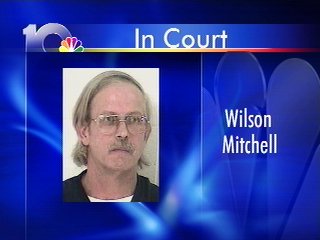 He's accused of stealing prescriptions from a Durant nursing home. Now, the Bryan County man is charged with a felony. KTEN's Jocelyn Lockwood reported live from the nursing home where the former medication assistant worked on KTEN News at 5.

KTEN News was told that no patients were in danger, although the man is accused of stealing prescription pills from Kings Daughters and Sons Nursing Home.

Prosecutors tell KTEN News that his actions did not result in patients receiving the wrong medication or dose. Rather, he's accused of ordering extra medication and pocketing the additional meds.

The man is identified as 50-year-old Wilson Mitchell. Mitchell was booked into the Bryan County Jail in September, following a lengthy investigation by the Oklahoma Attorney General's Patient Abuse and Medicaid Fraud Control Unit.

According to an arrest affidavit, in July or August of 2006, nursing home employees noticed Mitchell ordering additional medications.

When confronted, Mitchell said he would send the extra prescriptions back, but investigators learned the pharmacy he ordered from never received them.

In the affidavit, Mitchell denies stealing the drugs, saying he did order and receive the narcotics, but he doesn't know what happened to them.

One source, who asked us to hide his identity, explained what happened, "We get receipts for each one and the medicine, the narcotics, that we had did not match up to the receipts that we had."

Monday in court, Mitchell waived his preliminary hearing, and the judge scheduled his next appearance for March.

Prosecutors, though, say a plea negotiation is anticipated in the case.

Right now, there is no word on if a deal would relieve Wilson of possible jail time.

KTEN News also spoke with an investigator from the state Attorney General's office, and the investigator tells KTEN News that all they want is for Mitchell's license to be revoked.

In fact, his Medication Assistant certification has already expired, but he is still certified as a Long-Term Care Aide.

Monday night on KTEN News at 10, we start our series Trusted Care with a look at additional drug-related allegations.