KTEN's GM Speaks to Local Leaders About the DTV Switchover 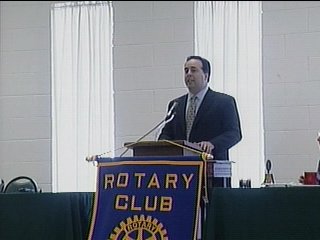 KTEN's General Manager spoke to business and civic leaders at the Denison Rotary Thursday, about preparing for the future.

Specifically, Asa Jessee talked to everyone about the nationwide conversion to digital television.

Jessee said, "What we're trying to do is get out there and help people get informed. Break it down to very basic, so what steps they need to take, which really... There are three easy steps they can take, to make sure they are ready and that their TV's will work after that switch over date."

Any other group that would like KTEN's General Manager to come talk to their group you can drop him an email at general.manager@kten.com.