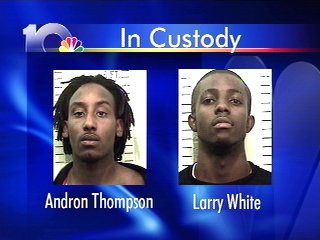 Two Ardmore men who robbed a local restaurant at gunpoint in July anticipated a release Friday from the Carter County Detention Center. But the federal government stepped in to press charges. KTEN's Meredith Saldana reports.

Ended the pair's 75-day jail sentence that was ordered by District Judge Tom Walker back in August.

In June, the men robbed a local restaurant at gunpoint while tying up several hostages including children. They were caught and arrested by Ardmore police while attempting to flee the building.

The men were scheduled to be released from jail Friday, but are now being charged by the United States Attorney's office for interfering or attempting to interfere with commerce by robbery using a firearm.

Larry White and Andron Thompson are currently in custody at the Carter County Detention Center until being transferred by U.S. Marshals to Muskogee next week to appear in federal court.