Impact: A Look at the Historic Impact of Lake Texoma's Flooding 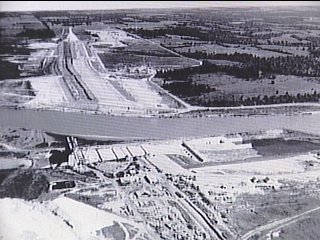 We finish our five part series on Lake Texoma with a look back at it's origins.  Today, the Denison Dam is a staple of the Red River community, but the long road to flood control on the Red River is one full of triumph and tragedy.  KTEN's Jocelyn Lockwood has the story.

The year was 1939.  World War II started in Europe.  It was the Great Depression. John Steinbeck's the Grapes of Wrath was published and construction started on the Denison Dam.

"It was certainly a major construction project that began in 1939, and the dam was completed and started catching water in early 1944," said Ron Jordan, Lake Manager.  "It was pretty amazing really that congress was able to allocate money to a project like that during war time."

Two major floods one in 1848, another in 1908 created the need for a way to control seasonal flooding on the Red River.  This inspired the man known as the father of the Denison Dam to lobby congress.  Mr. George Moulton, a Denison businessman, pushed for a dam on the river as early as 1925, but there was also another man playing politics.

"It was really the influence of Sam Rayburn, who was the speaker of the house, the man 2nd to the president in power, and his influence greatly contributed to the funding and construction of the Denison Dam," Jordan said.

Rayburn was speaker of the house longer than anyone in history.

In the Flood Control Act of 1938, congress authorized the dam and lake to be constructed for flood control, hydro-power and as a water supply.

"The dam, in the early parts of construction employed 3 to 4 hundred men, it was a major thing for the economy then because in the early 40's late 30's was post depression so not many jobs were available," Jordan said.  "It was a major boom for the local economy."

"There were prisoners of war working on the dam. Fact."

German prisoners of war helped clear more than 7,000 acres for the lake. In this picture the chess pawns were censored because it was feared they contained an enemy message.

To make room for the lake, 3,000 graves from 49 cemeteries were moved.

The Dam was completed in 1944.  63 years later, we witnessed history when water went over the spillway for only the third time.

Without the Denison Dam the landscape of Texoma would differ greatly from today.  Extreme flooding would be a major threat, the economies of a number of lake towns would be devastated or non-existent and, of course, recreation in the area would be limited.

The lake now covers 89,000 acres, with 585 miles of shoreline, and attracts more than 5 million visitors a year.