Impact: A Look at the Economic Impact of Lake Texoma's Flooding 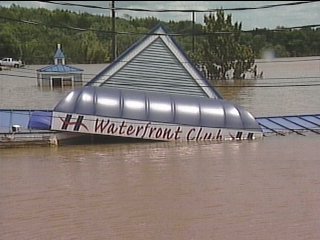 We continue our series impact with a look at how Lake Texoma flooding has impacted local businesses.

KTEN's Jocelyn Lockwood has the story of one business that represents so many others.

"On a Thursday thru Sunday..mamoth action," Tim Hayes, General Manager of Highport Marina said.  "Music blaring, boats piling up, 120 people out at the boat ramp, bands, excitment, but look around you today. It s not like that. Like you said, it's eerie."

Eerie because excessive flooding at Lake Texoma has drained business.

"The other businesses, the food and beverage, fuel dock, shop, service area, they're absolutely devestated."

Tim Hayes watched as millions of dollars in structures and revenue drowned in the high waters.

But for Hayes, that's not the hardest part.

"In March or April we have our annual job fair, and we hiresome of the best people we can possibly hire from the high schools, from Grayson County College and Denton College, and they come aboard, they're really exicitedto be bar tenders, waiters or something."

"It's an exciting place to work at during the summer.  They get to meet a lot of really interesting people, and we had to let most of the people go obviously..it was 55 people and that was diffiuclt to stomach."

"Depression, shock and just depression. Most of them love working out here, and I might add they'll all find other jobs. They've found stuff not necessarily the Pottsboro and Denison communities because the Pottsboro and Denison communities are devestated by this also, but they may have gone into Sherman or Dallas or some place, so they'll all do OK, as far as money," Hayes said.

Think of it as a trickle down effect. Less visitors to Lake Texoma means less money pouring into restaurants and hotels.

"The ripple effect of non-visitors to the area is probably somewhere around 400 million dollars."

Some businesses will pull through, others wont. But in the end, flooding will receede and business will trickle,then hopefully pour, back in.