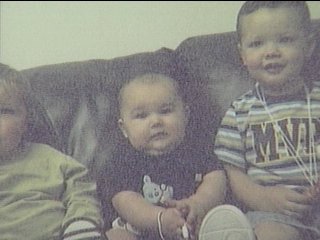 There are new developments in the death of a 14-month-old boy, who was killed when he was hit by a car in Denison.  KTEN's Kristi Branam has the update.

14 Month-old Zachary Duncan was sitting on the street curb just before seven o'clock last night, when he was hit by a car.  But, it was the car's second trip up the street that caused the accident.

Denison Police Lt. Mike Eppler said, "Evidently, when the car went by, the car turned around, driver came back with the intention of splashing the children again."

Except this time, the car hydroplaned and struck 14 month-old Zachary Duncan and his mother.

Harold Powers lives on the street.  He commented, "I was sitting on the porch here in front, and saw there were four little children playing in the water, like they were swimming in a swimming pool, and it made me nervous.  I was scared that something was going to happen."

Denison police say several children were playing in the water at the corner of Sears Street and 9th Avenue.  Powers added, "When I got out of church, I saw the ambulances here, you know, and I'd heard the 11 month old boy had been hit."

14 Month-old Zachary Duncan was taken to Texoma Medical Center, where he was pronounced dead an hour later.  His mother, Victoria Neasbitt, remains in the hospital.

Gloria O'Neal is Zachary's grandmother.  She said, "Everybody's just in shock, and everybody's trying to comfort each other, and it's just a mess right now."

The driver, 47 year-old Terri Perdew was arrested, and could face manslaughter charges.  O'Neal added, "It's just a stupid mistake, there's no other way to put it.  She didn't intend to hurt anybody."

Powers concluded, "It's pitiful that this had to happen to a little child, to wake some people up to be more careful.   It's just a sad, sad thing."

The driver, Terri Perdew remains in the Grayson County jail with a $25,000 bond.

Funeral arrangements for Zachary Duncan have not been scheduled.