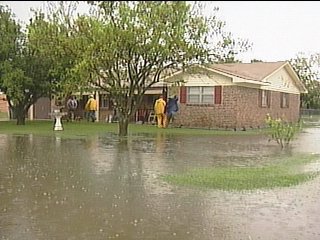 The Calera Volunteer Fire Department and emergency crews were busy using sandbags to prevent flooding Tuesday afternoon. By 6 p.m. water was already beginning to creep inside some homes, causing uneasiness for residents living on the west side of town.

"I've never lived anywhere when sandbags had to be used. This is a first for me."

Rain began to fall around 4 o'clock in Calera and within an hour Anna MacEntire's home was surrounded by water.

"I said if ever rained I'm not going to complain about one drop. I said that last year, now, this is terrible."

It was the same just a few blocks down on Allen Lane. Neighbors chipped in to help an elderly couple ward off water from seeping into their home.

"It was raining hard. Water was going inside the garage and inside the front door. I came over and they opened the door and we went inside. There was water everywhere. "

Residents say they're grateful for the Calera Fire Department's help, but they hope recent flooding will force to the city to revisit drainage problems on streets.

"We've complained several times. The ditches need to be cleaned. And nothings happened and this is the result of nothing getting done."

At the Northside Apartments, flooded streets became a playground for kids. But crews want to remind children and drivers that within minutes the water can be deadly.

"Even just a couple of inches of water a kid can drown. And the way this water is flowing right now, it could get one of them and pull them under. There could be a wash out that's not normally there right now."

Residents living on Ridgecrest Drive also experienced flooding. The Calera Fire Department says they will be working all night filling sandbags and placing them in flood areas if the rain continues.