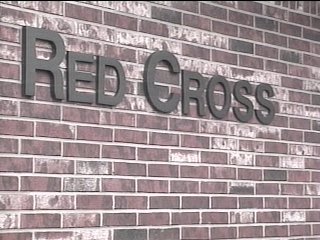 The South Central Oklahoma chapter of the American Red Cross says the day after deadly floods struck North Texas, phones were ringing off of the hook with people who want to help. Even though Red Cross volunteers must be trained before being dispatched to disaster areas, officials say there are still ways to aide victims.KTEN's Hailee Holliday reports.

After donating over $200,000 to the Katrina relief, officials say they weren't surprised when area residents wanted to lend a helping hand again. Training is required before Red Cross volunteers can help during disasters. The 5-hour training covers all phases of disaster such as mass care and shelter operation. South Central Oklahoma American Red Cross Director, Pat Whitener, says after the North Texas flooding she has been in constant contact with the Sherman Red Cross. Oklahoma volunteers trained in disaster assessment and family services are still on standby.

Whitener says, "Well since it's so close to our area it's just like a next-door neighbor, it's really people wanting to do something to feel like whatever they can do to contribute to the overall recovery of those people."