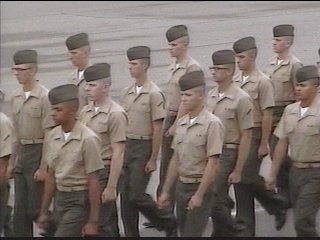 Have you ever wondered what our young men and women go through to become a United States Marine?

In part two of our Special Assignment report on the Educators' Workshop, KTEN's Meghan McDermott gives us an in-depth look at their experience... as they watched young men transform from civilians into members of America's elite fighting force.

When most people think of San Diego, Calif. they think of rows of palm trees lining the sandy beaches of the pacific coast. But what they don't realize is just beyond those beaches, lies the United States Marine Corps Recruit Depot where aproximately 17,000 men come every year, for boot camp.

A group of local educators spent one week on the depot learning what it takes to survive the 13-week training program. The educator's trip began as every recruit before them, with the 'Yellow Footprints.' This is when recruits are first "welcomed" to the next three months of their lives.

Over the following days, the educators were exposed to nearly every aspect of military training and way-of-life. And drill practice was no exception. From martial arts-- to water safety training-- Marine Corps history-- and even a little P-T, the educators began to see what their own students experienced.

Shelley Ebert, a former Junior/Senior Counselor at Broken Bow High School says, "I just wanted to go and see exactly what these students wre going through, because whenever they would come back to see me, I would see such a big change in them.   In the way that they walked, the way that they talked, just their whole manurisms."

In phase two of boot camp recruits are taken to Camp Pendleton for the excruciating 54-hour training exercise-- the Crucible. Part of which includes a live, simulated combat course. Teachers watched as recruits navigated through various obstacles, while simulated grenade explosions and gunfire filled the sky.

Educators practiced with the M-16 rifle, and then saw recruits handle the "real thing" on the range. From there it was off to see the Amphibious Assault Vehicles, known for their ability to travel seamlessly from water to land and vice versa.

After days spent on training fields and in classrooms, it was time for the educators to experience an Emblem Ceremony. At the Emblem Ceremony recruits receive the eagle, globe and anchor. The symbol of a warrior.

On the final day of the trip the educators attended a graduation ceremony. It is a day of celebration, admiration and reflection, as the educators thinik back to what they've seen recruits endure.

Stephen Smallwood, an 11th grade English teacher at North Lamar High School in Paris, Texas, says, "Never until this, when i actually observed, first-hand, what these young women and young men go through, and the commitment they make to us as the common citizen to protect us... that embodies all that i consider to be American.   I have just experienced an intense pride in observing what has gone on."

By the end of the week the educators have the ability to help their students seeking opportunities past high school graduation, and have the privildge of being one of the few to see first-hand, what it takes to become a part of the few, the proud, the marines.