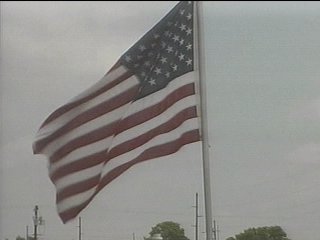 Another Memorial Day ceremony in Carter County was attended by a large crowd today. People in Ardmore memorialized past heroes at the Oklahoma Veterans Center. KTEN's Andrea Kurys talked to Oklahomans to find out how they were spending their long weekend.

Most people said this weekend isn't about going to the lake or celebrating a day off from work; it's about anational time to remember sacrifice and courage. A mix of family, friends and veterans stood together outside today beneath an American and Oklahoma flag at half-mast.

There were whispered prayers and tears, as people reflected on what today means. Guest speaker General Marshall Scantlin reminded the crowd that the average age of a soldier is about 19-years old. Too young to buy alcohol, but old enough to die for our country. After the ceremony, KTEN asked Ardmore residents what the importance of Memorial Day was to them.

David Cisneroz said, "Memorial Day is to kick off the summer and to remember all the loved ones and veterans."

Keith Frank, who had a son in the navy said, "They've paid the ultimate sacrifice, the ones who lost their life. Our son didn't have to die in the navy, so we were one of the fortunate ones."

Paul Riley said, "My dad was a veteran, I'm a veteran, my grandpa's a veteran. I think it's just time we need to reflect back on things, that's why wehave it so good. It's because of those veterans."

Today, some veterans say that many Americans had forgotten the true meaning and traditions of Memorial Day...until someone they knew was touched by the war in Iraq.