The History of KTEN-TV - KTEN.com - Texoma news, weather and sports

A Proud Past, A Promising Future - KTEN serves viewers for over 50 Years! 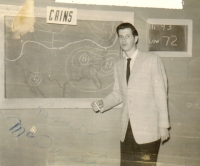 "Broadcasting is described as capturing unforgettable moments in time. . . instances that define our history. We've been here, and we'll continue to be here for you. . . when news breaks, as stories unfold. Because the news is more than just stories, it's more than just information beamed over the airwaves, and broadcasting is more than a job. It's a privilege and a mighty responsibility. Television is a dynamic medium with the capability to reach and change millions of lives. With that power, it remains our duty to serve, as we have done and will do forever more."

KTEN- It all Began with a dream to bring television to the citizens of the area.

Plans for a new studio and production facility began on June 1, 1964, and later that year, the new facilities located at 1600 Arlington in Ada, OK, were dedicated in ceremonies featuring Clint Walker, who at the time, was starring in the ABC western series, “Cheyenne” and Paul Harvey, a well-known journalist and television/radio personality. KTEN also began using videotape in the “sixties” and could offer expanded coverage of high school sports and community interest events, which included “Ardmore Action Month."

In the 70's KTEN continued to evolve and grow

The 1970’s brought about restructuring inside and outside of the facility in Ada, OK and plans began for the construction of a new and taller tower. KTEN’s news department expanded to include a remote unit and was able to offer more localized events and information to an even more expansive audience. This decade also established ABC-TV and KTEN-TV in sports and feature programming as the first to bring coverage of the Olympic games and to create a trend in television with the first mini-series “Rich Man, Poor Man.”

KTEN's Growth Marches On, with Expanded Coverage and New Studios in Ardmore, OK and Denison, TX

In March of 1985, KTEN was purchased by a group on investors from Durant. In October of 1985, KTEN opened offices and studio facilities in Ardmore. Two full time news staff and sales operated out of the studio located in the Ardmore Energy Center. A news bureau and offices were opened in Denison, Texas at the historic Katy Depot in January of 1986 providing KTEN a base of operation in the Sherman-Denison area. With two news reporters, a production photographer and sales, KTEN established itself in this northern Texas area.

In July of 1998, KTEN was purchased by the Lockwood Broadcast Group. Lockwood pledged new beginnings and years of growth and expansion for KTEN as they enter the next century and an exciting new future for the television industry. From that point to the present date, Lockwood has moved KTEN to a position that it has enjoyed throughout its rich history - to the role as the Leader in this market in news, Internet, broadcast, community support and ventures yet known.

In The Early Years of 2000, KTEN Expands To Prepare For the Future.

On August 1, 2002, KTEN-TV broke ground on its new, 16,000 square foot, state of the art facility and on November 18, 2002, KTEN began broadcasting from its new home at 10 Highpoint Circle in Denison, Texas. (Just off of Highway 75). Leaving behind its former home of 18 years, the historic Katy Depot in Downtown Denison. This move signifies KTEN's continued commitment to the Texoma Area as it enters its next 50 years of service.

On June 1, 2004, KTEN began a year long celebration commemorating its 50 years of broadcasting to the area. Although KTEN has seen several different owners over the past 50 years, it has remained committed to the original goal of its founders - serving the viewers of this area. Over the past 50 years, KTEN has expanded and grown to serve those needs and has kept a steady pace of continued and never ending improvement that has yet to cease. As KTEN enters its next 50 years of service, we re-affirm our founders vision to protect, serve and enhance the lives of those in the area that rely on us for its weather, news, information and entertainment needs and desires.

KTEN Announces the Launch of DTV, HDTV and Multiplexing Services

Once again, KTEN demonstrates its commitment to its viewers with the launch into the next era of broadcasting - digital!  In July 2006, KTEN began providing full DTV, HDTV and Multiplexing services to the viewers of this area. Now offering NBC programming in standard analog broadcast, digital broadcast and High Definition broadcast!  (For the past three years, KTEN has been providing limited DTV services to selected cities in our service area on a test basis.)

On September 18th, 2006, KTEN gave birth to a brand new channel and a brand new broadcast network for the Sherman - Ada market.  On this day, KTEN, with its new digital broadcast offerings,  began broadcasting on digital channel 10.2 (26.2) the CW Television Network.  The CW Television Network is combination of the former WB Network and UPN Network, both of which ceased operations the day the CW Network launched.  KTEN proudly offers this new channel to the viewers of Texoma via over the air broadcast and through nearly 30 cable head-ends throughout the market.