Pelosi: Impeachment articles will go to Senate on Wednesday 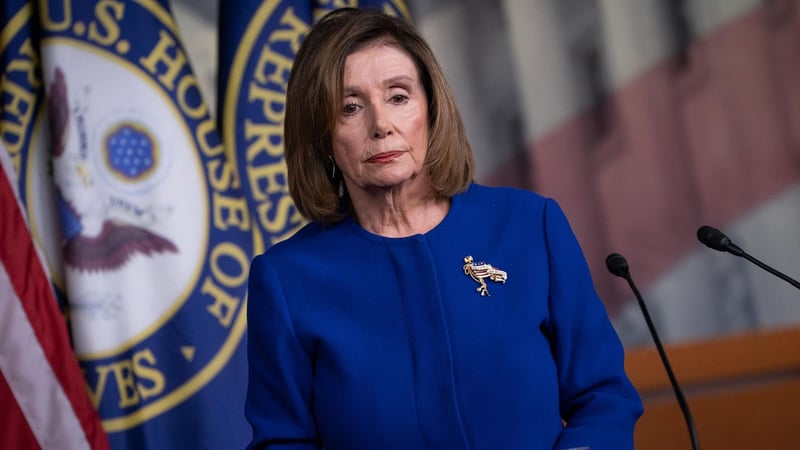 House Speaker Nancy Pelosi is expected to name the lawmakers who will prosecute the case against President Donald Trump. (J. Scott Applewhite/AP)

(CNN) -- Speaker Nancy Pelosi said that the House will vote Wednesday on a resolution to name the impeachment managers for the Senate trial of President Donald Trump and transmit the articles to the chamber.

The vote will kick off the process to officially start the trial in the Senate, which will include ceremonial elements this week and the beginning of the trial likely next Tuesday, according to Senate Majority Leader Mitch McConnell.

Pelosi told her Democratic colleagues Tuesday morning at a closed-door meeting on Capitol Hill that she wasn't yet announcing the managers who would prosecute the impeachment case against President Donald Trump, according to lawmakers leaving the meeting. She later said in a statement that the resolution naming the managers and transmitting the articles, a step that's needed before the Senate trial can begin, would occur on Wednesday.

"The American people will fully understand the Senate's move to begin the trial without witnesses and documents as a pure political cover-up," Pelosi said. "Leader McConnell and the President are afraid of more facts coming to light. The American people deserve the truth, and the Constitution demands a trial."

McConnell on Tuesday once again slammed the House and Pelosi for the delay on sending the articles, accusing the House of wanting the Senate to try to help its case against the President.

"A House majority, fueled by political animus, may have started this with frivolity. But it will fall to the Senate to end it with seriousness and sobriety," McConnell said. "It will fall to us to do what the founders intended — to take the long view, move beyond partisan passions and do what the long-term good of our institutions and our nation demands."

Wednesday's vote will officially move the impeachment case out of the House and into the Senate, after the House voted to impeach Trump on counts of abuse of power and obstruction of Congress last month over his dealings with Ukraine.

Before the Senate trial begins, the Senate will have to pass the resolution dictating the rules of the trial that McConnell is preparing to approve with only Republican votes. McConnell has said he plans to follow the Senate's procedure in the 1999 impeachment trial of then-President Bill Clinton, while Democrats have pushed for an agreement to hear from witnesses, arguing that Senate Republicans are helping the President cover up his misdeeds.

Pelosi delayed sending over the articles after McConnell would not detail the rules or process for the trial, but McConnell did not budge, arguing that the House would not dictate how the Senate is run.

On Monday, McConnell said Pelosi's "strange gambit has achieved absolutely nothing." But Democrats argue Pelosi's decision to withhold the impeachment articles for nearly a month helped push the conversation about whether the Senate trial should include witnesses like former national security adviser John Bolton, who said last week he would testify if subpoenaed.

Pelosi has continued to keep her plans on impeachment close to the vest, and lawmakers who could be tapped as managers on Tuesday said they were in the dark about who will be appointed by the speaker.

There are two Democrats widely expected to be included: House Intelligence Chairman Adam Schiff, who led the House's impeachment inquiry, and House Judiciary Chairman Jerry Nadler, whose committee approved the two articles of impeachment that the House passed last month.

At Tuesday's caucus meeting, Schiff laid out what the process for the Senate trial would look like, according to lawmakers, where the House managers will present their case, the President's legal team will make their own presentation and then the senators will have an opportunity to ask questions.

Pelosi raised concerns to her caucus at the closed-door meeting about the Russian hack into Burisma, the Ukrainian energy company that Trump asked Ukraine to investigate over the hiring of Vice President Joe Biden's son Hunter. Pelosi said the Gang of Eight was not briefed on the matter and that she learned about it through news reports, according to multiple sources.

The sources also said Pelosi laid into McConnell, saying, as she's said before, that he is acting like a rogue Senate leader. She mused that sometimes she wonders whether McConnell has Russian connections, the sources said.

Once the impeachment articles are formally sent to the Senate, the chamber is expected to kick off the opening of the trial with the swearing in of all 100 senators. The substance of the trial, however, is not expected to begin until next Tuesday.

The White House is also readying its defense of the President, including a push for the Senate to include the option of moving to swiftly dismiss the charges against the President in the rules of the Senate's impeachment resolution, a motion that would require 51 votes and would end the trial.

Ahead of the Senate Republican lunch, White House legislative affairs adviser Eric Ueland told reporters that "the President's rights will be protected, including the right to a motion to dismiss."

Asked if it would be in the resolution, Ueland said: "The technicalities are for others to talk through, but we are confident the President's rights will be protected."

But McConnell said Tuesday there was "little or no sentiment from the Republican conference for a motion to dismiss," to be included in the initial rules resolution for the trial.

But many in Senate Republican leadership have made the case that including the House firebrands will not help the President because they won't appeal to the Senate Republican moderates who will be key to deciding how the trial progresses -- and whether there will be any witnesses called.

"My advice to him would be: Let's not infect the Senate trial with the circus-like atmosphere of the House," said Sen. John Cornyn, a Texas Republican. "And I think there would be an increased risk of doing that if you start inviting House members to come over to the Senate and try the case."

This story has been updated with additional developments Tuesday.

House Speaker Nancy Pelosi announced plans for a vote on Wednesday to appoint managers for the impeachment trial of President Donald Trump in the Senate.

Here is her statement:

"In December, the House upheld its Constitutional duty to defend democracy For The People: passing two articles of impeachment against President Donald Trump -- abuse of power and obstruction of Congress. I am proud of the moral courage of Members to honor the vision of our Founders for a Republic, the sacrifice of our men and women in uniform to defend it and the aspirations of our children to live freely within it.

"The Senate GOP Leader has signed on to a dismissal resolution. A dismissal is a cover-up. The American people will fully understand the Senate's move to begin the trial without witnesses and documents as a pure political cover-up. Leader McConnell and the President are afraid of more facts coming to light.

"The American people deserve the truth, and the Constitution demands a trial. The House will now proceed with a vote on transmitting the articles of impeachment and naming impeachment managers on Wednesday, January 15.

"The President and the Senators will be held accountable."