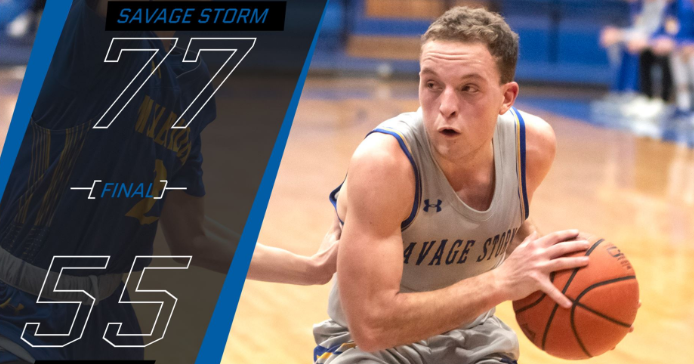 DURANT, Okla. – Southeastern shot better than 50 percent from the field for the second-straight game and got a pair of 20-point outings from Kevin Buckingham and Adam Dworsky en route to a 77-55 victory over Southern Arkansas on Saturday afternoon in Bloomer Sullivan Arena.

The win lifts the Savage Storm to 12-3 overall on the season and 6-2 in Great American Conference play heading into a Jan. 16 matchup with rival East Central at 7:30 p.m. in Bloomer Sullivan Arena.

"Just took a couple times of the ball going in the basket and you start to pick up a little confidence," said Dworsky. "We knew they were getting tired in the second half so coach was saying when we get stops we need to push in transition so I was able to get to the front of the rim a couple times and get my rhythm going."

"What happens is that teams have to pay so much attention to Kevin and then Kellen," said head coach Kelly Green when asked about Dworsky's performance. "We're getting the ball inside to Kellen and he's finishing plays and he's moving the ball from the perimeter and that trio there makes so many people focus on them which enables our other guys to play off of them."

"We got some cuts to the basket," Green continued, "People start watching them and then Bobby gets a cut, A'Torey gets a cut and all of a sudden we're shooting layups with some other people."

Buckingham led all scorers with 26 points on 10-of-16 shooting with a trio of threes on his way to moving into fifth-place on Southeastern's career scoring list. He passes Jason Stampley who had 1,679 points and lifts his career mark to 1,687.

Dworsky was not far behind with 21 points on the night, hitting 10-of-13 from the field while just missing the double-double with nine assists.

Kellen Manek rounded out the double-digit scorers with 11 points while adding eight rebounds and handing out five assists.

Goncalves finished the contest with eight points but was the game's high rebounder with 13 boards as the Storm held a 39-to-36 edge on the glass.

For the second-straight game the Storm shot better than 50 percent, hitting 54.4 percent from the field for the game, posting a 51.6 percent effort in the first half only to better that in the second with a 57.7 percent clip over the final 20 minutes.

The game started slow as both teams were scores over the first 3:23 before trading bucket with SAU taking the lead and pushing it out to 9-4 by the 14:17 mark of the half.

SE would score the next five points to tie the game, and after back-to-back Mulerider buckets the Storm would reel off a 14-0 run capped by a Manek layup with 9:55 to play in the first half and taking a 23-13 lead.

After an SAU bucket the run would continue and when Buckingham connected on a jumper off a Dwosrsky assist with 3:14 to go in the half the run would reach 30-4, extending the Storm lead to 39-17.

However, the Muleriders would answer with a 12-2 run over the final three minutes to cut Southeastern's lead to 41-29 at halftime.

SAU would close to within single digits and eventually chip the advantage to just five points at 50-45 with 12:14 to play, but a Buckingham layup would trigger a 10-0 run capped by a Goncalves three to make the score 60-45 with 9:16 remaining.

The Storm lead would grow from there, eventually hitting 22 points which would be the final margin of 77-55.