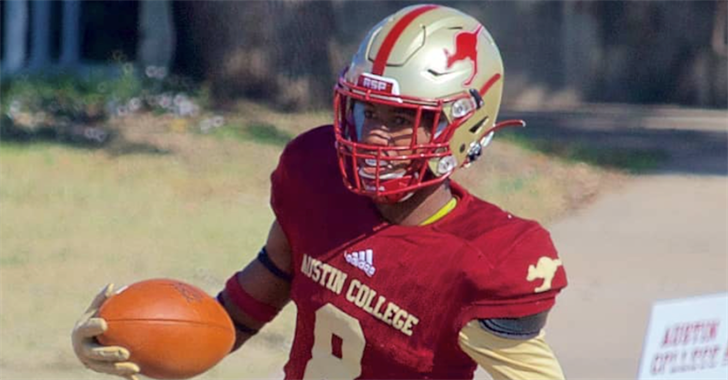 SHERMAN, Texas - The Austin College football team was dominant early on, taking a 29-0 lead midway through the third quarter, but the 'Roos would need to hold off a comeback attempt by Rhodes in a 36-28 win on Saturday at Jerry Apple Stadium. The 'Roos are now 5-4 overall and 4-3 in Southern Athletic Association play.

The 'Roos got on the board midway through the first quarter on a 19-yard touchdown run by Colt Collins, making it a 6-0 game after Matthew Smith's point after attempt was blocked. Smith would get a chance to put points on the board in the second quarter, drilling a 21-yard field goal to make it a 9-0 game with 8:02 left before halftime.

Rhodes drove deep into Austin College territory on their next possession before settling for a field goal attempt, but Sharun Jones came up with the block and Darius Hypolite picked up the football and raced 84 yard the other way for a touchdown to make it 16-0. The 'Roos would get one more chance to put points on the board and capitalized, as Collins found Kai Brinkerhoff in the back of the endzone from five yards out to make it 22-0 at halftime.

Austin College took advantage of a punt block by Matthew Quenichet midway through the third quarter to gain possession deep in Rhodes territory, and Collins would soon plunge in from a yard out for his second rushing score of the day to make it a 29-0 game. However, the momentum soon shifted to Rhodes, with Jace Franklin finding Charlie Mackey for a 45-yard gain on the first play of the ensuing drive, and on the next play after that Franklin connected with Ethan Chamberlin from five yards out to make it a 29-8 game after a successful two point conversion.

The Lynx forced a fumble and managed to recover on the next drive for Austin College, and Stephan Jean-Francois made the 'Roos pay with a 12-yard touchdown run. The conversion attempt failed, making it a 29-14 game with 3:57 left in the third quarter. Rhodes would add one more score in the period, with Franklin completing passes of 17 and 44 yards to drive the Lynx deep into Austin College territory, and Mitch Batschelett scored from two yards out to cut it to a 29-22 game following a two point conversion heading into the fourth quarter.

Austin College put much needed points on the board on the ensuing possession, driving 74 yards in 11 plays, capped off by a 10-yard touchdown run by Evan Powell to make it 36-22, but the Lynx refused to go away. Franklin found the endzone one more time, connecting with Chamberlin again from 11-yards out. The 'Roos managed to stop the conversion attempt, keeping the score 36-28 with 2:50 left to play.

Rhodes got the ball back one more time and managed to drive the ball to midfield, but Keegan Nichols forced a fumble on a sack as time expired to seal the win for Austin College.

Collins finished the game completing 24-of-32 passes for 272 yards with a touchdown, adding 71 rushing yards and two more scores on the ground. Hagan Vrazel hauled in three passes for 78 yards and Powell finished with 32 yards on nine carries and a touchdown. Connor Carnes had 11 tackles to pace the 'Roo defense and Nichols finished with nine stops, including four for loss.

Franklin completed 24-of-45 passes for 341 yards with two touchdowns and a pick, adding 46 rushing yards, and Mackey caught three passes for 76 yards for the Lynx. Rhodes was led defensively by Tony Heyward and Kobe Bins, who each made eight tackles.

Austin College heads to Georgia to close out the season, taking on Berry College next Saturday.