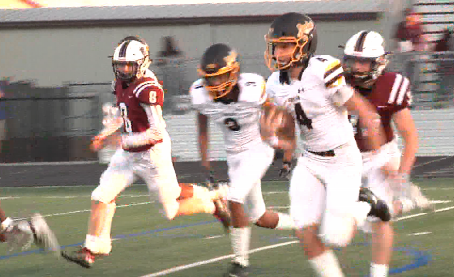 "We need everyone who can be there to be there. You know, it's going to be a great atmosphere and we're going to need it be a home-field advantage" said Denison Head Coach Chad Rogers.

"Oh, we're really excited. Any time you have a chance to go to the playoffs it's always fun. It was fun on Friday even though we lost and we're ready" said Denison Quarterback Caleb Heavner.

"Friday night could be a win or go home game for the Denison Yellow Jackets. Playoffs are on the line for them. They'll be led be quarterback Caleb Heavner who has started just 7 games this season for the yellow jackets and some nerves were there for games earlier this season but the upperclassmen have no doubts he'll be able to put the team on his shoulders and take them to a win tomorrow night"

"I feel like he's prepared well overall. Like he works hard in practice and he just tries to execute everything perfectly to his best performance and I feel pretty confident in him" said Ellis.

"That first week was really the first week where I got most all the reps and now it's just, I've gotten so many reps and I feel so comfortable with the offense now," said Heavner.

With less than 24 hours until kickoff, Denison hopes that the game will go in their favor so they can celebrate with the community that has supported them through it all.

"It would feel great, all the work we did and we prepared well. If we just come out and do our thing it would feel good" said Ellis.